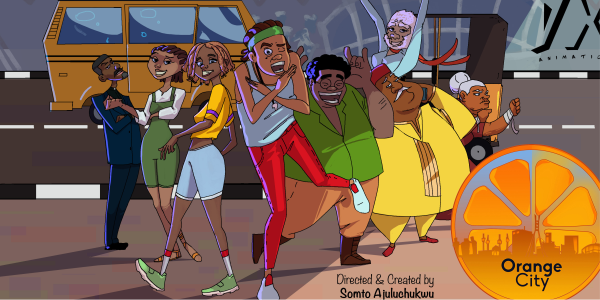 Creator and director Somto Ajuluchukwu explains “I wanted to create a story that shared a side of Lagos which excites everyone, aside of Lagos that makes you just want to be there.”

OC allows us access into a world where we experience the sub-cultural influence of pops-cultures stardom and celebrity on the Odyssey of discovering what it means to manifest the African dream.

Somto says, “I am inspired by Seth MacFarlane and Matt Groening, I wanted to create a story adults could connect, with using elements of our culture which are most polarizing such as our music, politics and street culture, I really can’t wait to continue telling the story as we pull you deeper into this wacky universe.”

The main character Wahala (meaning trouble in pidgin) ever the optimist, is a “hot on the streets” Afro beats musician living with his ex Military grandmother Mama Nne. When his uncle a well known money thirsty politician Chief Obadike invest heavily into his indie record label Orange City, Wahala and his dysfunctional team : Kome, Kabuki and Ape take on a hilarious journey through stardom as they discover the true face of Nigerian celebrity, lifestyles and culture!

Vortex the studio behind Orange City is an award winning creative content company based in Lagos, keen on exporting African culture through comics, animation and games.

Mr Ajuluchukwu continues, “at Vortex exporting African culture is our goal, we hope to make this a six part limited series which we’ve been sale to any VOD Platform which share our vision, Africa is at a tipping point and animation worth millions and it is time for African investors to step in and own it .”

Orange City premiered at that Accra Animation Film Festival this August 2019 during the Year of Return festivities.

The film is set to screen at the Encounters Short Film and Animation Festival in Bristol UK and The Silicon Valley African Film Festival in California.