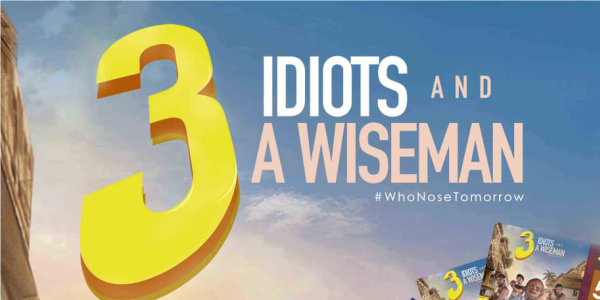 Having a good laugh is not only one of life’s amazing gifts but also therapeutic. Doctors are unable to prescribe laughter, despite it being the best medicine in the world. In light of this, Plan B Studios and Superfam Network have collaborated to produce what is arguably the funniest movie in the last decade – ‘3 Idiots And A Wiseman‘.

The star studded and straight up comedy movie features a tall list of most of the funniest people in the business of acting. Imagine Akrobeto, Kwaku Manu, Bismark The Joke, Kalybos, Clemento Suarez, Lawyer Nti, Two Idiots, Comedian OB, SDK and his parents, Filaman, all in one movie alongside great talents like Prince David Osei, Fiifi Coleman, Cookie Tee, Rebecca Mauro, Johnny B Hartman, Kojo Delong, Cabum, AJ Pounds and many others.

If the title of the movie is anything to go by, there are some 3 idiots and someone who is or claims to be a wise man. People have been wondering who among the list of funny actors in the movie qualifies to be the wise man and who the idiots could be. This has stirred up some interesting conversations on social media.

After returning from prison for a crime his childhood best friend committed, Asataman, is left to the mercy of the streets as his friend, Nii Lamptey, now a wealthy, notorious kidnapper who uses philanthropy as a façade to mask his dirty dealings, wants nothing to do with him because associating with him may hurt his political ambition. Asataman teams up with his hip and eccentric Uncle, Zerubbabel, an old friend from prison, Bronzy and Bronzy’s daft big-nose prodigy, Pinocchio, to form an unlikely band of sophisticated robbers. Ironically, their brand of sophisticated attempts at robbery always end in crazy and hilarious results. After a few unsuccessful attempts at robbery, they devise a complicated scheme to take from Nii Lamptey, what to them is rightfully Asataman’s – his riches.

The highly anticipated movie will premiere on the 2nd of February at the National Theatre. Two shows; 5pm and 8pm with tickets selling at a flat rate of GHc 50. We are anxiously waiting for the premiere to finally put to bed the big question; who is the wise man?

The Production outfits behind the movie have made plans to premiere the movie in all the regions. Dates and venues for other centres will be communicated soon. For sponsorships, ticket reservations and enquiries call 0266267394.