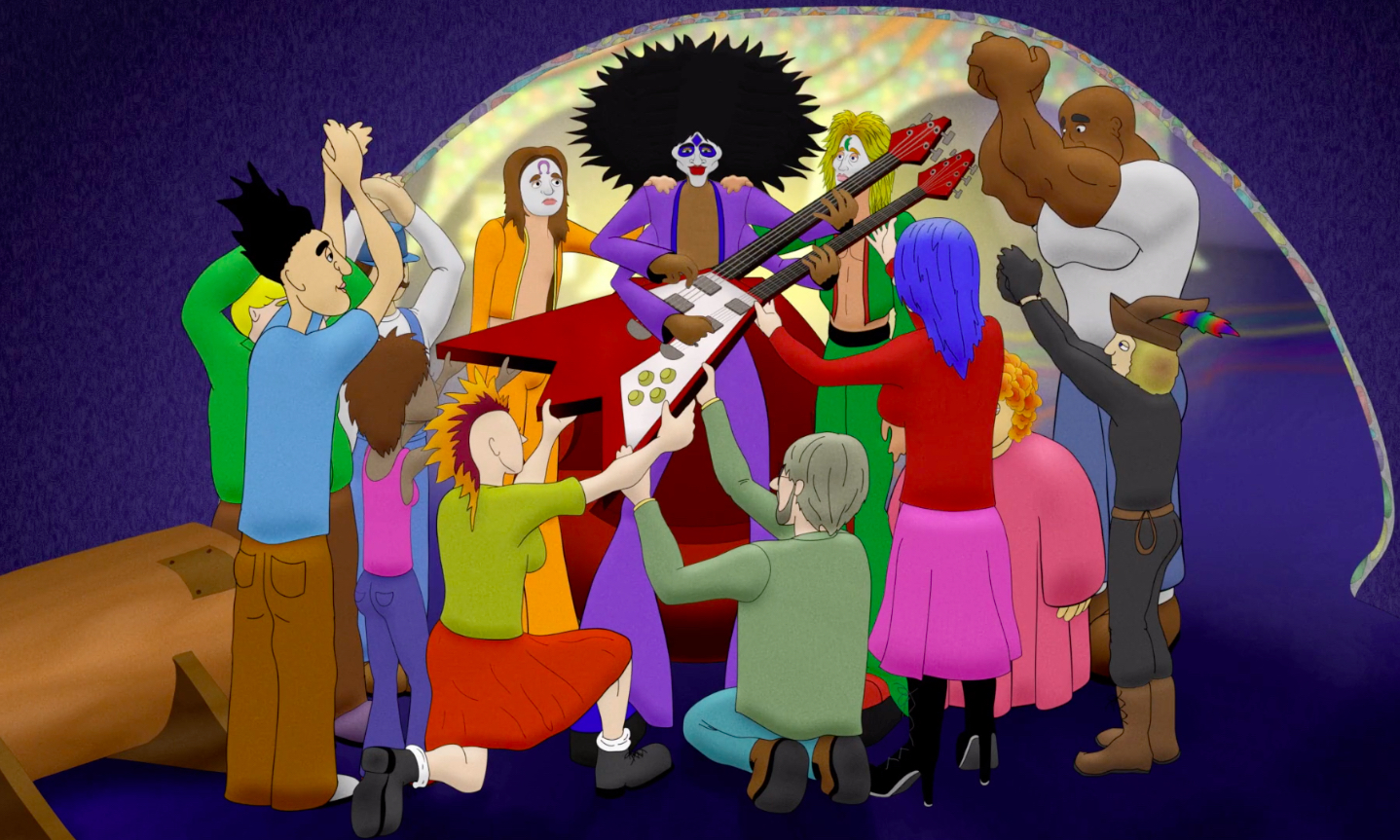 The film is written and directed by Röckët Stähr who is also the musician behind all the rock songs you hear in this film. He describes this as an animated rock opera feature film. Rightfully so, it fits the description. It’s an animation that tells a story which is accompanied throughout by classic rock music that provides the narration.

The story is told by the visuals set in the year 2165 and about a four-armed rockstar called Röcky Stähr. As he performs with his band at a concert with an audience full of his fans who have their faces painted like his. He gets shot and killed but it is not immediately clear who killed him.

The story then shifts to a year earlier, 2164. The world is pictured trapped in a cage. Rock n roll has been banned, and a dictator, C. Czar, rules over everyone. A mad scientist and a group of rebels in an underground hideout bring to life their creation in Frankenstein style. Röcky Stähr is born. The plan is to use him and his music to free the world from tyranny. Röcky falls in love with a lady from the audience at a concert he first performs at. She becomes his distraction and Röcky soon forgets his mission. And soon he becomes an object of worship for the audience that he is supposed to liberate.

The animation details the story with each scene and frame being as graphic and detailed as needed for you to fully understand exactly what the writer is trying to communicate.

But it is not just about the animation. It also includes the entire music album which was arranged in an almost linear narrative fashion in the most creative way you can imagine. The music artistically adds to the narration with its lyrics and the mood it sets.

The music is undeniably good and you can feel the passion in the songs being performed. There is some sincerity in the lyrics that can’t be explained. It just hits you and you feel it and just want to soak it all in and not want to stop watching what seems like a confusing, chaotic experience.

Röckët Stähr’s songs are in varying tempos and compositions with themes and lyrics that tackle subjects like morality, religion and leadership. The songs interestingly also express a varied range of emotions that all seem to help you understand what you are watching.

Watching this film is similar to watching a visual album except for this time the visuals are in animation format. The animation style is quite rudimentary, however. It is in classic vector-based format and not fanciful in any way.

The characters, scenery and props are all quirky and odd with vibrant colouring. As the story requires, there is some bloody and grotesque imagery as well. But the animation choice makes it all mild and almost laughable in a cynical way.

The unique style interestingly adds a bit of quirkiness and humor to this film.

The films biggest strength is in the music and its ability to keep you attentive and interested whilst helping you understand all that you are watching. I would score it 5/10.

The film provides a unique experience that might be different for everyone but in the end, there is no denying how creative this is.

There is no denying that this might not be appreciated or enjoyed by everyone. Especially for persons who are not fans of classic rock music. But if you give this a chance, you are sure to find yourself entertained, to say the least.

Death of a Rockstar is currently available for streaming, do check it out if you are interested in seeing something very different.

Movie Review: Crossing – Family over everything.