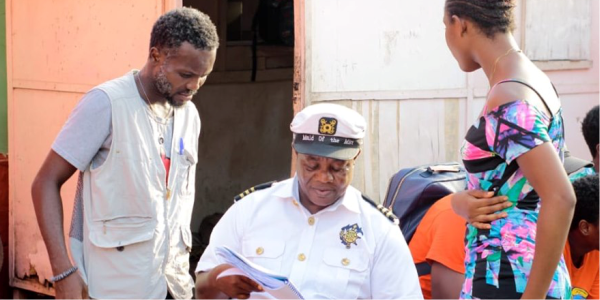 If you are a buff of entertaining and informative series and TV shows, get ready to follow another interesting series produced right here in Ghana titled, Asase Seaman.

The synopsis for the series reads, Seaman, 55 is an old crew member who is married to Caro Shine and has two children; Awale, 19 and Frema, 17. Although he earns good salary, Seaman is an irresponsible husband and father. The only domestic achievement he has chalked is to have set up Caro Shine in trading. Owing to this fact he is of the view that she does not have the moral right to request housekeeping money for the rest of their lives as a family.

He does not concur to society’s norm that a father must discipline his children, hence rather scolds Caro Shine when tries to call the children to order. There is certainly no peace in their home. His fondness is to spend money on young ladies of his daughter’s age, alcohol and friends

In a chat with Herbert A. Korley (Awele of Chokor Trotro fame) , the writer and director, he expressed that, “as a writer, I love writing about ideas for series and tv shows”. He also explained that the concept for Asase Seaman is “so extensive, it can’t be caged in a feature length film”.

Watch the First Episode below and subscribe to the channel for subsequent episodes.

The series stars Dickson Owusu (Charsey of Chokor Trotro fame) as the title lead and other seasoned actors like, Alberta Addo, Abeiku Nyame, Felida Mensah, Vanessah Manotey and Herbert A. Korley himself as Gbovi.

“I wanted to use it as a medium to raise new talents for the film industry, because I believe that should be an underlying reason for producing series” further revealed in our conversation and as such, the series introduces some fresh blood from Roback Film Club which is under his guidance and tutelage.

Superfam Set To Return With Another Hilarious Stage Comedy, ‘ACCRA WE DEY’

All You Need To Know About, Benny Jayden, The Young Cinema Engineering Entrepreneur