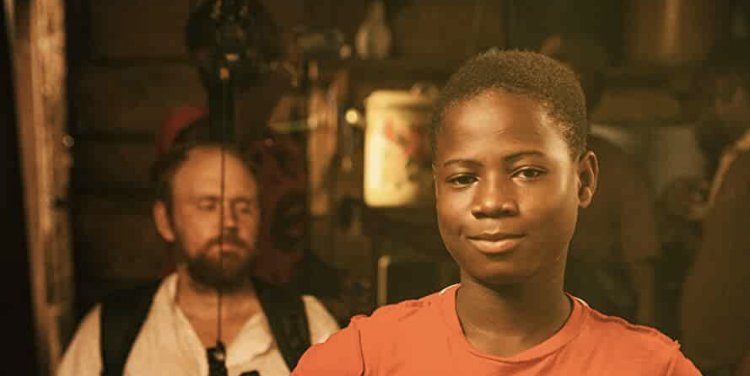 Beast of No Nation in 2015 threw a spotlight on several acting prospects from the Ghana film industry. Notable of the them was Abraham Attah who has gone on to feature in several other big projects.

One other young talent the film unearthed is Emmanuel Affedzi. The young lad seems to have finally caught his big break starring in the German Ghanaian migrant drama, BORGA.

He considers this as his breakthrough role after making appearances in a couple of tv shows and commercial. Speaking on THE Am CLUB Live on MX24TV, Emmanuel expressed his excitement about being a part of the multiple award-winning film.

“I can see myself as big star because being in movie with big stars like Adjetey Anang and Miss Lydia Forson is so great. I have always wanted to meet them and now I have worked with them” he said.

In BORGA, Emmanuel Affedzi does not only get to star alongside Adjetey Anang and Lydia Forson. The film also features Ghanaian-German discovery of the year Eugene Boateng as well as Emmy Award-winning German actress Christiane Paul. It also stars Jude Arnold Kurankyi, Joseph Otsiman and Fred Nii Amugi.

BORGA is produced by German production companies Chromosom Film and East End Film as well as well as Ghanaian/U.K. production company TD Afrique. It has won several awards international and locally as well. This includes 8 awards out of the record 18 nomination it had at the Ghana Movie Awards 2021. Taking home both the Best Film and Best Cinematography nods.

‘BORGA’ is finally seeing a Ghanaian release date on Friday 24th June 2022. The film will be premiering at the Silverbird Cinemas Accra Mall and West Hills Mall at 7:30pm and 9:30pm with tickets selling for 50ghc.

Watch the trailer for BORGA below