BTS: Check Out Some Behind The Scenes Photos From The Making of #HCW 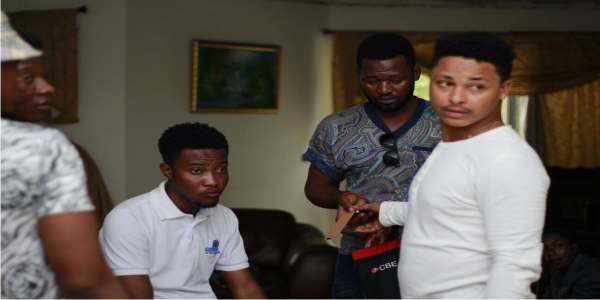 Umar Krupp Image presents to you their fifth and latest production, YOU MAY KILL THE BRIDE.  A Romantic Comedy set in a class of its own.

Move producer and actor Umar Krupp in a brief discussion with GhMoviefreak described this movie as his favorite and the best movie he has ever produced. He also hinted that the entire cast as well as the production team all tried something new and very different from the conventional in making this movie and can’t wait for the world to see.

You May Kill the Bride written and directed by the cine-god Abu Idi, tells the story of two married couples with dark and hidden secrets and how they battle their inner selves to prevent those secrets from exposing their imperfections.

This Romantic Comedy set to be premiered on the 4th of June 2016 at the Sliverbird Cinemas Accra Mall, promises not to only entertain you but to also bring to your attention many challenges most everyday relationships might be facing and how best to deal with them.

Below are some behind the scenes photos from the making of  You May Kiss The Bride.