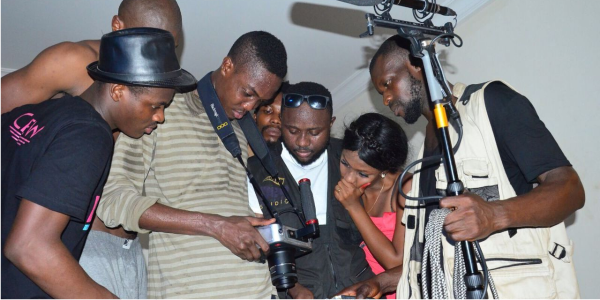 DI GH MULTIMEDIA & SAMAR CONCEPT takes us on another epic romantic comedy journey full of lips bitten and a basket full of laughter and lessons. The producer Umar Krupp made sure this project will tackle issues regarding marriages, relationships, friendships and how this relate to societal norms and accepted standard in our cultural settings.

UMAR KRUP played the character – HENRY who is the handbag kind of guy and will do anything that his wife Salma who played Mr. HENRY as of him. She is in the middle of many situations trying to make sure many of the relationship do not work the way they should. She will make sure she crushes them.

SELLY GHELLY played SARAH who is an emotional and sex driven person, she admitted that the role was challenging as compare to most of her shoots in the past where she played her normal harsh and notorious girl. She has to dig deep to bring out the best on this project to satisfy her fans and lovers of good product in terms of movie and cinematography.

Samuel Bravo played DELA the LONGMAN who is typically calm and humble and will go for anything you present to him without any objection or rejection.

The movie was written and directed by none other than the man of the moment – ABU IDI who did a good job blending new and somehow old characters together in his kitchen to cook a mouthwatering meal and he is hopeful people will not regret watching this movie. They will rather watch it over and over again because it has everything you will need life.

YOU MAY KILL THE BRIDE premieres on JUNE 4th at all SILVERBIRD CINEMAS. Join in the hype and promo using the (hashtag) #youmaykillthebride on social media and you might win your self free tickets to go watch with friends and family.

Watch the official behind the scenes video below.

Page to Stage Productions All Set for Accra this Weekend