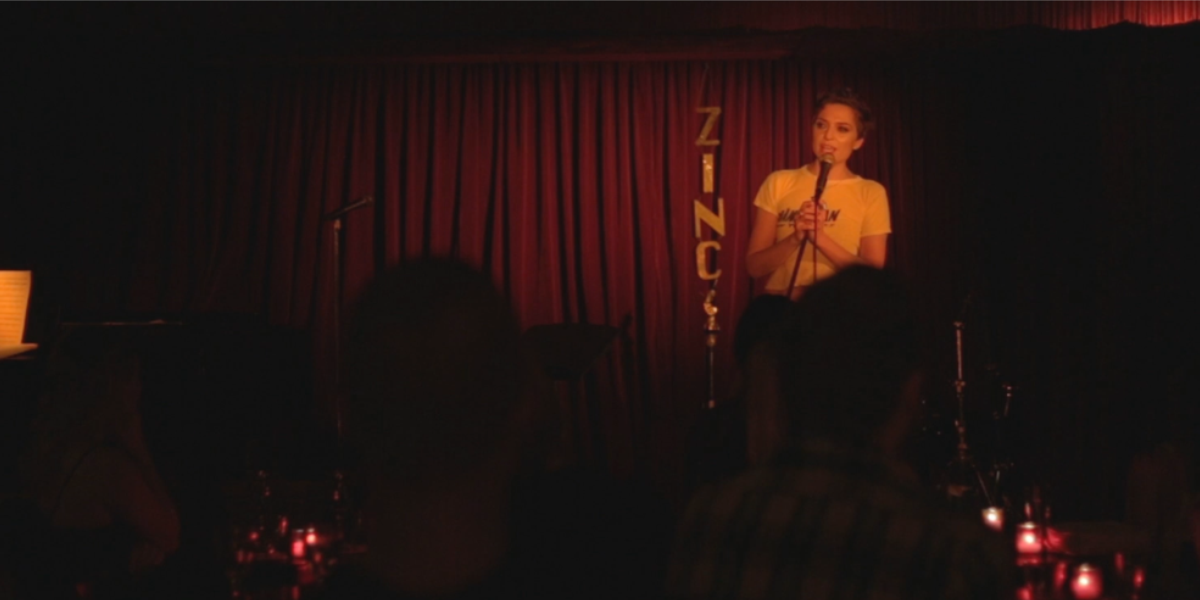 Funny Pains is a documentary feature which follows stand-up comedian Wendi Starling her life and her working process as she works toward perfecting her craft as she strives to make it to the top of the pile in the business.

In 90mins we are given a full sense of her struggle with bipolar, her stint in the mental hospital as well as some of the obstacles she has had to face on her journey.

In the pursuit of realizing her dreams she moves from Los Angeles to New York as she believes the cultural diversity and the buzz of the ‘Big Apple’ somehow fuels her passion and creativity. She clearly hasn’t escaped fully from her past and is being either held back or motivated by it.

The documentary feature fuses some of her live stand up performances making jokes about some of the terribly situations she’s been in with off camera narrations of how those incidents really happened. Some of her jokes can be seen as funny or unfunny depending on who is listening and how they interpret the situations. But Wendi believes they are jokes worth sharing. She explains how she is able to tap into those hurtful situations to create her material and how she also handles some of the sometimes-unflattering responses and reactions from her audience.

There is no denying that stand-up comedy is one of entertainments toughest and most competitive professions especially for women. Funny Pains gives a much closer look at how tough things can really get for women who choose to become professional stand up performers. Some other female comedians also share their thoughts on the business and the challenges they each have had to face dealing with hostile audience or other comedians.

Drug use, sexual assault and mental health issues are the main themes delved into by the comics as they share their experiences. They each seem to have gone through a situation or experience that they draw their inspiration from to fuel their creativity. For Wendi, she admits to haven relied heavily on cocaine at some points in her life to keep her active as she juggles two day-jobs with her passion.

Just like most of the other comics featured in this documentary. She is driven by the innate need to rise above her pain through embracing them and accepting that she is in the best place of her life regardless of things that have happened in the past. She channels her jokes from her personal experiences. Some, very gnarly not so funny real-life situations yet she’s able to make light of those experiences just to get her audience laughing…. literally at her expense.

Wendi comes off as a scarred woman but she wears her scars with pride showing that her struggles are responsible for the person that she has become. We also get to hear a little about her upbringing and childhood. Some of her contemporaries describe her jokes as brave and honest. There is no doubt about that and I can only imagine how difficult it must be for her to make jokes about how she was gang raped at a friend’s wedding. But that isn’t the only material she’s got for her performances. And hopefully when she lands a comedy special, we should get to see more of her material.

It’s evident that she treats her performances as some form of therapy sessions where she is able to let loose and let out some steam. And won’t hesitate to clap back at hostile audience members when they get out of hand. She explains that comedy, a lot of the time.. ‘takes a big idea breaks it down into something meaningless’. When something is funny, it’s easier for people to accept it and dissect it no matter how uncomfortable the issues are.

For a documentary film it is revealing enough, informative and somehow informative on the in and outs of the stand up comedy business.

Funny Pains deserves a 3 out of 5 stars rating on my scale. By the time it ends you get a better sense of appreciation of the journey a comic goes through dealing with their own issues whilst committing themselves to the services of making others laugh even when they themselves need a break from all the pressures of life.