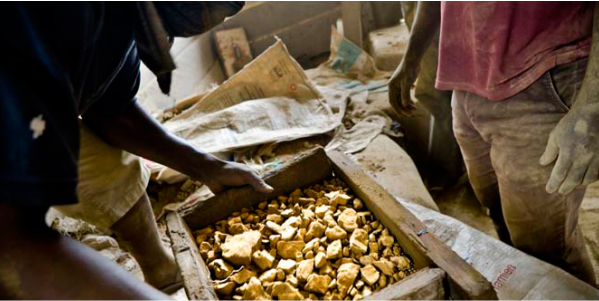 As one of the five documentaries that screened at this year’s Black Star International Film Festival, we got to see the captivating documentary film shot here in Ghana, “The Money Stone”.

This film follows the lives of two separate individuals all involved in galamsey; illegal small-scale mining. Justice and Maxwell although, hundreds of miles apart in two different parts of the country share stories that appear different but yet quite similar in many subtle ways.

For the audience, the experience feels up close and personal, almost through the eyes of the subjects in the film. You get to follow their journey and struggles both down in the pits on also on the surface where you would imagine things would be a bit more easier. The realization is that, in both cases they are faced with some life-threatening choices that takes more than just courage to surmount. Challenges that all lead back to the need for money and the search for what in their minds could be a better life from their current situations. They might appear strong with smiles but in many ways, they are broken by the pressures that surround their lives and situations. After all, it takes a broken man to want to risk it all over and over again.

Maxwell Duur’oh in a pit.

The progression of the story reveals more about the mental and emotional strengths of the subjects and their families even in the face of poverty and lack of quality standards of living and education.

In the case of Justice, you see his growth and maturity from a young boy who has just dropped out of high school into a man who knows and wants to do better for himself. He grows conscious of all the risks involved in the search of gold in the bowels of the earth but is still bent on changing his fate.

His growth brings more challenges for him at every turn , but through it all, the focus is to have a better life and be able to cater for himself and the people that matter to him, his family. We see his transition from a boy to a man who has survived all the risks involved with galamsey but lands on his feet in a career path that is still not far from where it all started for him.

For Maxwell, the hardship in his life is glaring. His father is the only man in the house and he must cater for a large family and he needs the help from Maxwell who is still a child to be able to support the family. He is torn between staying in school or going to brave the odds working in the mines to help take care of his family. But the former choice isn’t an easy one either. To get to school, he must trek on foot for an hour at least to and must go through the day on an empty stomach. Clearly, his life on the surface is nothing less of an endless cycle of risks and struggle. Each day he is drawn closer to making the choice of going back to illegal mining. Whilst trying to be a support for his family he also requires their support to be able to focus and stay in school.

The documentary also focuses on James, a field worker for Afrikids, an NGO that helps send kids back to school. He himself once involved in small scaled mining details his close call with a collapsing mine pit that scared him away from the quest for gold. He takes on the case of Maxwell and is a committed to making sure he doesn’t return to the mines. He reveals how the lack of quality education and socio-economic hardships in most of the rural areas contributes a lot to the woes that lead people to risking their lives in mines.  He encounters his own challenges trying to provides any support he can to help keep Maxwell in school.

The film brings to the fore how these challenges affect the family structure and relationships. Justice falls out with his dad at some point even after all the risk he goes through to support him. Maxwell on the hand sees the bond between him and his father strength as he throws his support behind him to stay in school no matter the challenges.

For both of Justice and Maxwell, the journey doesn’t seem like it’s near an end as their future is filled with hope but and persistent fear of uncertainties. As is the case for many children and young individuals who find themselves in such situations.

Justice Afekah going down a mine shaft.

The Money Stone might be the documentary that we all need to see to remind us of the dangers of illegal mining whilst we find ways to either regularize it or find solutions that would better the lives of people to steer them clear away from it. This film is gripping and intense whilst staying fair and balanced detailing both the pluses and minuses of the issue. Ghana has benefited in many ways from the exploits of small sale miners just as it has from the licensed companies, some of which are equally complicit in the neglect and destruction of lands and water bodies.

As the only escape from poverty for many households illegal mining has now become a part of  the way of life for impoverish Ghanaians. And it appears the only way to cut down the risks involved would be regularize it whilst adopting measures that would improve the safety and working conditions of these people who have chosen to mine

The film is engaging and keeps you hostage through the emotional and psychological journeys the subjects go through. It cuts bare to the issues, the situations and the possible fixes without downplaying the need for all of us to help in providing solutions to the problem.

Maxwell Duur’oh in a classroom.

Stuart Harmon made this film over a span of 8 years. The extents to which he was able to go with this film shows how committed he was to telling this story and possibly effecting some form of change by providing very much needed call to action in the minds of people who get to see this film both domestic and abroad.

If you were not at the Black Star International Film Festival to see this, you lost out another good one. Put “The Money Stone” on your list of documentaries to see. It is truly an eye opener and a revelation of truth and hope.