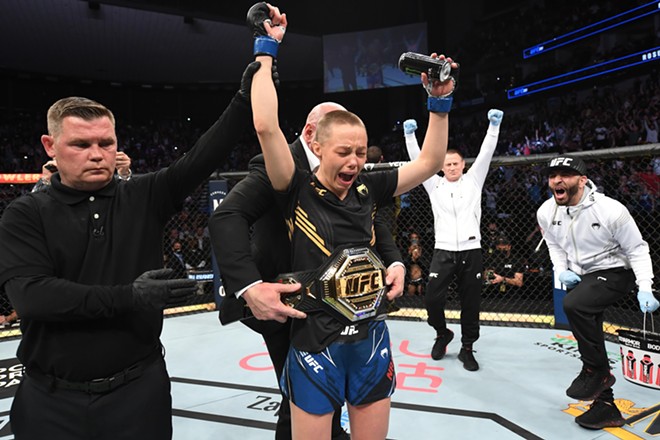 This documentary is about the life of UFC straw-weight contender Rose Namajunas. It essentially covers her journey as a mixed martial artist and her rise to fame.

Rose is the daughter of Lithuanian immigrants who moved to the United States to escape Soviet rule. Brought up by parents who loved to play music, you wouldn’t have immediately guessed she would have grown up to be one of the toughest contenders that the world of combat sports has seen.

The documentary features enough old footage of Rose as a child with her family as well. Giving you gives you a better appreciation of her influences and upbringing. We also get to see her mother and her brother as they are featured in the film as well.

As she steadily rises in her career one thing is certain she is determined and resilient.

After losing the belt for the first time she returned to Lithuania to visit her family there. The trip seems to reenergize her to aspire for more greatness.

The documentary also features Pat Barry, a former UFC fighter who is now Rose’s better half. He shares his first encounter with her and how he fell in love with her. Now the two are inseparable and could easily be considered as one of the UFC’s ‘power couples’, that is, if there is anything such as that. He also talks about how his career now is to help make sure that Rose is the best version of herself always. Their bond is beautiful to see and you can only wish that nothing comes between them.

Winning the title wasn’t easy on her mental health. As she admits in the film that she did struggle with the pressure that comes with the spotlight you are constantly under as a champion.

She also admits that her biggest fight is with the voices of doubt that creep into her head at times. But she doesn’t let those demons win. “I am the best” she constantly reminds herself this even in the heat of a fight.

She also talks about the abuse and molestation she suffered as a child at the hands of her stepfather and how that affected her confidence growing up. She channels that experience into motivation for some of the advocacy work that she does.

She is far from a thug as her nickname suggests. As unassuming as she looks, standing at just five-foot-five she is a fierce contender and skilled fighter. She has a beautiful personality and is committed to making sure she makes an impact to help change the world. All this is captured in this documentary that seems to span several years of her career as a fighter.

For a fan of the sport and the UFC in particular this was an absolute delight to watch. Rose’s story is one that needed to be told. She is as beautiful and graceful in her journey which is filled with both victories and defeats. A journey that is only beginning for her.

The documentary is directed by Marius A. Markevicius who does a great job at making sure this film doesn’t look and feel like any of the pre-fight promotional trailers and mini-documentaries. This is much more detailed and intimate. It feels like something intended for more than promotion for a fighter or an upcoming pay-per-view event.

If this documentary is the first of many by the UFC then this is a great start. This humanizes Rose more and makes her even more loved. I can imagine it would do the same for many of the UFC’s fighters either retired or currently on the roaster.

I will score this documentary 4.5/5 stars. It is an enthralling and perfect capture of the legacy of a fighter who has more years of greatness to unleash. It tells a story that is sure to be relatable even to people who have no interest in mixed martial arts or any form of combat sports.

Rose’s journey reminds you of the power of positive affirmation something that everyone  needs.

Thug Rose: Mixed Martial Artist is available on UFC Fight Pass starting Nov.9. You certainly have to check it out even if you are not a fan of the sport.