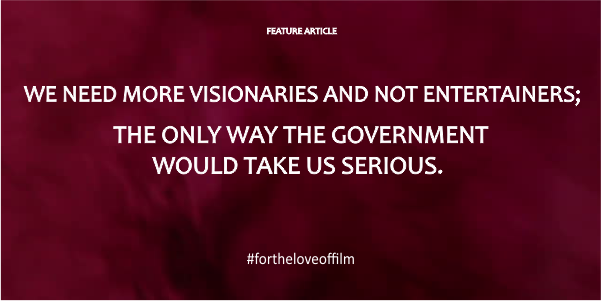 I have struggled with finishing this publication like most of my features for a while now but I am inspired to finish this one now.  And it’s all because of the current conversation about the Ghana Film industry triggered by Gabby Asare Otchere-Darko’s startling tweet a couple of days ago.

I am sure a lot of us are interested in knowing the 10 films he watched and then maybe the conversation can be more directed at those films and what the makers sought to achieve with those films.

His disappointments and qualms clearly are not about the quality of our films but the failure of these films to push some “Government” or “Ghana Agenda”. The question is “What exactly is the Ghana Development Agenda that is supposed to be pushed in our films?” and “How has the government helped in pushing that Agenda through film and arts?”

I might not have the answers to the above questions but one thing is clear and we should not mince words about it… “THE GOVERNMENT DOESN’T CARE”. At least not enough to want to help push their own development agendas through film and arts.

If there is anything I would agree with Gabby Asare Otchere-Darko on, it’s the need for us, especially as creatives, to elevate our consciousness. We should be conscious enough to know by now that we can’t keep having faith in the government to solve our problems. Likewise, we should be conscious enough to know that, collectively we can do a lot more for ourselves even before we can get the governments attention, leaving them with no choice than to get involved in solving our problems.

Undoubtedly, film, just like any form of art should cut deeper than just sheer entertainment and we seem to have forgotten that. Most of our creatives have comfortably relegated themselves to being just entertainers when the arts have never been only about entertaining the masses. Arts is supposed to spark conversation either subtly or bluntly. Arts is supposed to awaken our consciousness and cause us to have conversations about the things that matter the most. Now, the most important question should be “How many of our films have been able to spark conversations in the past few years?”

“When artists give form to revelation, their art can advance, deepen and potentially transform the consciousness of their community.” ~ Alex Grey

Our creatives are no longer seen as visionaries or radicalists, they have become just mere entertainers and that is the real problem that needs to be tackled. Where are the films that are supposed to make the government feel uncomfortable? Where is the art that is supposed to reproach the masses whilst forcing them to take a stand against the systems that stifle our own development? Where are the conversations that are going to course correct our general backward way of thinking?  Where are the stories that would bring about a renaissance in our cinema culture? All these we can still do whilst being a source of entertainment.

Visionaries don’t wait for systems to be put in place, they force systems to fall in place. Our creative arts is suffering because we are expecting to be helped when in actuality we hold the power to force our leaders to do what is right.

Granted, there are few of such films that have preached positivism and tried to spur us on as a nation. But they are not enough. Undeniably we are producing more chaff than grain. The government is yet to feel our power as creatives, just as the rest of the world is too. And until that happens the people who have the power would continue not to care about our lack of funding, non-exiting distribution channels and plaguing IP piracy issues. We have downplayed the power of our arts for far too long and we paying for that with all these challenges we are currently facing.

It is true we as creatives are doing our best. But we can do more…. In fact we can do better than we have even without the government’s help.  It is clear these politicians and people in Power don’t care enough about the creative arts. It is clear there are no systems in place to help us thrive. But what are we using as creatives to hold these people accountable? Why aren’t we using our craft to pick their conscience?

A film like Rafiki (2018) which is not even a year old has already been tagged by many as an African classic because of the weight it carries. It touches on a very sensitive issue and many people have argued that it has an LGBT agenda that doesn’t align in anyway with African cultural values. This film was banned by the government of Kenya but the creatives stood behind it. The same government had no choice than to lift the ban on it so that the film could meet the eligibility requirements for selection for the 91st Academy Awards.

Clearly, not the best of examples of forcing the government to pay closer attention to film. But at least it is obvious creatives in Kenya have the attention of their government. Now the Kenyan Film Industry even with their own challenges, many of which are similar to ours, is seen as the next force from Africa taking Nollywood head on in the race for global recognition.

Maybe it would take a film that daring which our leaders would be forced to discuss in parliament for our problems to be heard.

Let us forget about pushing a national agenda for a second. What agenda are we pushing for ourselves collectively as creatives?

Instead of us fighting and mauling over who is supposed to do what for us, lets collectively fight at creating a better impression of ourselves as artist, elevate our craft and rally the masses. Only then will the government most likely care enough about us.

Whilst we ask for what Gabby and his likes have done for the creative arts, we should also proceed to ask ourselves what we also haven’t done for ourselves and the arts as creatives.

Our ultimate goal as creatives should not be to just excite people and make money. We should endeavor to reproach and challenge the systems in our own small way.

After all, we have the power, so why don’t we use it? #Fortheloveoffilm

“The writer is the visionary of his people… He anticipates, he warns.” ~ Wole Soyinka