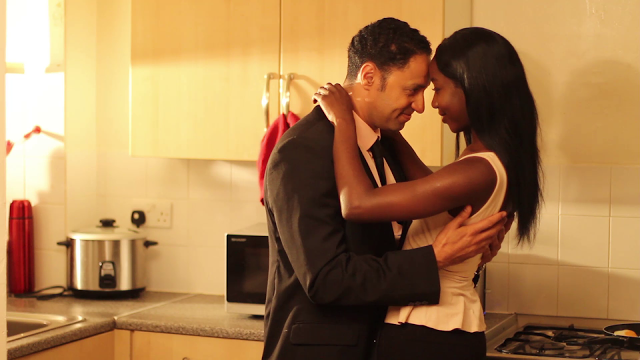 #GhMovieFreak is here to stay….

What better way to spend your Friday night than getting smothered with a good movie that makes you forget how terrible your week was? That was exactly the feeling after watching this movie.

A beautiful love story has a way of changing your outlook on a lot of things. Afua’s Diary did it for me.

This movie tells the story of a pretty African girl living in the UK who’s already complicated life of being in a rocky relationship with a boyfriend who depends on her for everything and having an alcoholic father back home in Ghana who keeps wasting money she sends him is further rattled by the fear of being deported as her visa nears its expiration.

Writer Bibi Owusu Shadbolt is responsible for this simple yet awesome script that does not just spell out a nice love story but also highlights the struggles of immigrants. It’s hard to not appreciate the story line of this movie. Evidently this isn’t the usual “everyday” Ghanaian movie.

Yes, it was straight forward, easy to grasp and follow… but it was equally entertaining and educative as well.  It did have the element of humor in the right proportion that makes you crave for more.

The audience laughed and showed excitement at the right intervals as the story progressed. Without the humor, Afua’s story would have been just boring and mushy.

I feel the cast was perfect for the script. Arguable, I think it’s good the makers didn’t rely on popular names to make this movie. Although they are entirely new to us Ghanaian audience, both leads, the gorgeous Cleopatra Wood (Afua) and the charming Fabio Abraham (Alan Freeman, Afua’s boyfriend) were a delight to watch. They seemed to have some good chemistry that sort of complemented their characters. It was also a delight to see ace Ghanaian satirist Kweku Sintim Misa (KSM) in his role as Afua’s father. This goes to affirm the fact that a good script and not “big name actors” is the foundation of a good movie.

A good romantic movie would not be complete without the perfect score. It’s difficult to ignore the choice of songs/soundtracks for this movie. The selection of songs was just perfect and on point for the story. The right acoustic tunes complemented the right scenes and made them more pleasurable. There were some scenes which I found myself paying more attention to the background song instead of the characters dialogue.

Nonetheless, the scenes felt isolated at some points, kind of in a haste to end.  Noticeably also, some accents were clearly forced to have the African originality… we blame no one, we could only appreciate their effort.

Overall the production of this movie was above Ghanaian standard but it wasn’t flawless either. I believe there were some hitches in the audio which can be pardoned.

GhMovieFreak would gladly score this movie… 7/10.

Trust me when I say this was a good movie. Right from the start you are sure you are going to love it and it doesn’t disappoint at all. We would describe this as a classy romantic comedy that also captures the not often spoke of struggles of immigrants abroad, made with the Ghanaian audience in mind. A movie that truly deserves to be recognized and applauded. No wonder it has already won an award at the WAD Film Festival in New York.

It’s still showing in cinemas, #GhMoviefreak strongly advises that you go watch this with your significant other and you guaranteed having a nice time.

“I love you Friday born”

Movie Review: Beasts of No Nation 2015 *A Powerful Young Boy*