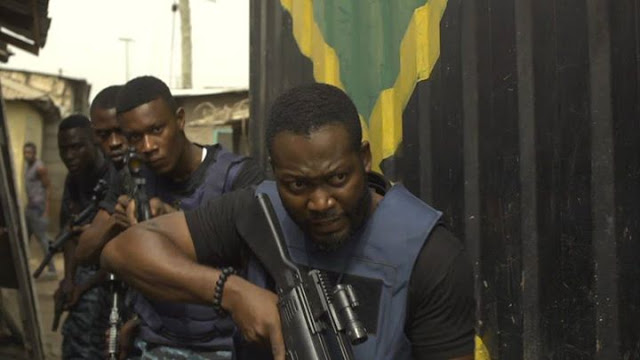 I was a bit hesitant going to see this movie today, been several long months of work and I was finally getting a weekend were I could just chill at home and get some very much deserved rest on a Saturday, but… Lewis hit me up and said… “Hey, let’s do this for GhMoviefreak”.

A lot of promo had gone into generating some hype for this movie, right from huge billboard ads to social media adverts, so there is certainly no way I can say I hadn’t seen or heard about this title. The trailer I had seen on Facebook really seemed promising…well for a Ghanaian movie… it was more than just promising. Good thing we made it to the premiere.

Cartel: The Genesis, tells the story of a Narcotics Investigative Unit agent who returns from training with the DEA in the United States and is motivated to hunt and bring to book all persons involved in the growing illegal drug distribution in Ghana.

Off the top, you immediately get the feel that this is something different. Its more than refreshing to finally see something other than the usual “Romance turned sour”, “Family feuds”  or any of those cliché story lines that Ghanaian movie makers are most comfortable with.  I was immediately impressed after seeing the trailer for the first time. So I did have high expectations going to see this movie… well… I did leave a margin of doubt in my mind should in case this movie fail to deliver.

Besides a couple of shortfalls, it didn’t fail to deliver..… I say again… it’s more than refreshing to finally see something other than the usual. The story line is different and I liked it.

One of the things I liked also about this movie was the fact that it didn’t have that many big stars. I mean we have seen several Ghanaian Movies lately that have paraded about  13 big names (at least) in one cast line up and yet still failed to live up to expectations. But Cartel was different.   Adjetey Anang (Pusher) played the lead role of Fiifi Wilson the DEA trained agent, and trust me when I say his performance was more than impressive.  It also starred, Joselyn Dumas, Kofi Bucknor, Prince David Osei and Emmanuel Armah.

The acting in this movie I must admit was stale and mediocre at some points, obviously this is something very common in most Ghanaian movies I have seen. You can’t really fault the movie makers on this because they did use quite a number of new faces. The well seasoned actors really did own their characters and did well to nail their roles. I don’t recall ever being this impressed by a Prince David Osei performance as what he showed in Cartel.

We did laugh at a couple of scenes, I admire and appreciate the tiny elements of wit some of the dialogues had.

Noticeably Joselyn Dumas didn’t have that many scenes or lines in this movie. It was almost like she was just making a cameo appearance… nonetheless her fight scene did make up for all of that. Yes… Joselyn did throw down and it certainly was entertaining to watch.

The fist fights and gun fight scenes were excellently choreographed, nothing too much or exaggerated… just perfect enough to keep the “Action Movie” vibe going. The audience did enjoy those scenes and were equally impressed as I was, the cheers and applause can never lie. That last fight scene at the end of the movie deserves to go into the books of the Ghanaian Movie History as the “Most Epic Ghanaian Movie fight Scene –  yet”.  Both actors did portray the right amount of emotions to sell that scene.

Although I liked the cinematography to some extent, as I was quite impressed with some of the very decent angles the producers shot some of the scenes from, I feel they did abuse the Arial shots. That many Arial shots just didn’t do it for me any more at some point. The sound wasn’t flawless either; it’s quite a bit of a letdown for a movie this promising to make sloppy mistakes in the sound department. Even the score was questionable at some parts for me and almost ruined the value of those scenes.

There were also some minor continuity and production flaws like below standard visual effects, still photography flashes and crew members reflections caught on camera that didn’t really mere the overall quality of this movie that much but only sort of did well to remind me that I was watching a Ghanaian movie. (These little things do matter as well). Pascal Amanfo needs to pay more attention to these petty details. A very good script can be reduced to substandard if production doesn’t go right.

Regardless, I did enjoy watching this movie from start to finish, there was no single point that I felt like I was wasting my time at all. The unexpected twist at the end of the movie certainly does make you want to see the next one. Yes… The Genesis is only the beginning as they say… I honestly can’t wait to see the sequel. I can only hope and wish it steps up on the action and thrill that this one provided.

The Ghmoviefreak team  would gladly rate this movie a well-deserved 6/10.

In all, Cartel gives me hope that the Ghanaian movie industry still does have a bright future, a future were our movies can rub shoulders with some of the best in the world. I have always hoped that the day would come sooner than later, today… I have seen that day move a little bit more closer

Yes, I strongly recommend you go watch this movie as it is certainly worth your time.

Movie Review: Beasts of No Nation 2015 *A Powerful Young Boy*