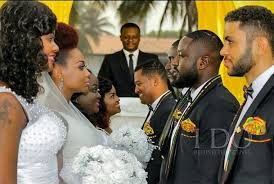 Ok so my homeboy Lewis decided to give this movie review “thingy” a shot. Since I wasn’t able to make it to the premiere and he was…. (With all those fine girls he was posing on IG with lol).

It was a bit surprising to see the Silverbird cinemas this packed. I mean I frequent there a lot but had never seen a crowd this big all wanting to catch the premiere of “I Do”. This made me even more eager to see it and eventual tell how it goes. Leave it to young talented and overly confident Kobi Rana to do an awesome job to publicize his work to create so many wave and attention.

“I DO”, a Ghanaian produced movie which stars the likes of Van Vicker, the producer herself Kafui Danku, Nana Ama Mcbrown, BBA star Elikem Kormodzi, Roselyn Ngissah, Jasmine Baroudi, Mauli Gavor and Jose Tolbert . The director Kobi Rana had the entire cinema applauding the great effort he put into making this movie a success. From start to end, throughout the 100 minutes long drama, romance and comedy filled movies.

Obviously you would would have high expectations from a movie with huge backing from brands like Hauwei, Moet and La Palm Royal.

The movie starts with the exchange of vows by the four couples without going through how they met up and all the “blah blah blah” stuff. It was right on point for that fact. It later goes on to reveal certain aspects of their lives to which their partners knew nothing about.

Though the entire movie takes place over one night (honeymoon) at an exquisite hotel, the rooms well prepared with some Champaign’s, shower robes and the beds well laid. The whole “one night” movie idea reminded me of another Kobi Rana movie, Hotel Babylon.

The characters played their roles well without much flaws. Jasmine Baroudi, who plays Sena happens to be what society looks down upon, thus a lesbian, and so had to please society by marrying Eli (Elikem Kormordzi). Sena and her lesbian partner had their motives planned out for the night where they were to execute the groom and run off with her partner.

Adotey (Van Vicker) had an ordeal all night long with her partner. But he showed why love conquers all. In that, her partner Anita (Nana Ama McBrown) who had a secret of having contracted a sexually transmitted infection and couldn’t risk infecting Adotey. So out of fear and anxiety she tried committing suicide to end all things. But Adotey gave her reasons to stop her actions. He had a funny horror dream of Anita during his nap in the tub.

Randy (Jose Tolbert) the rich kid. He had an empire to inherit once he was married. He therefore had to marry Charlotte A.K.A. Shali Jata Jantra, (Producer Kafui Danku) a“hooker”. He signed a contract with her to get this done but later fell in love with her.

Ike (Mawuli Gavor) and Esi (Roselyn Ngissah), the funniest couple had their share of the breezy night. With Ike suffering with erectile dysfunction due to use of illicit drugs in the past and Esi wanting to let go off her cravings had to deal with their own funny problems.

The score for the movie was good. Most people might not pay attention to these things but the right score certainly adds a depth to the entire story line. The live band musical surprise for the grooms by their brides went well with the audience where they were singing along. The grooms had their go with teasing dance choreography for the ladies. Sort of something that you might of seen in Hollywood’s The Best Man Holiday. Either which way it wasn’t corny as anyone would have expected it to be.

Honestly it was refreshing to see a Ghanaian movie that was not only well produced but equally indulging and entertaining as well. I have always believed that the Ghanaian film industry had a better future and after seeing “I Do” I am more reassured of that.

In my books I rate this a perfect 7/10….. I enjoyed every single bit of this movie.

This movie was good and did really match the hype.