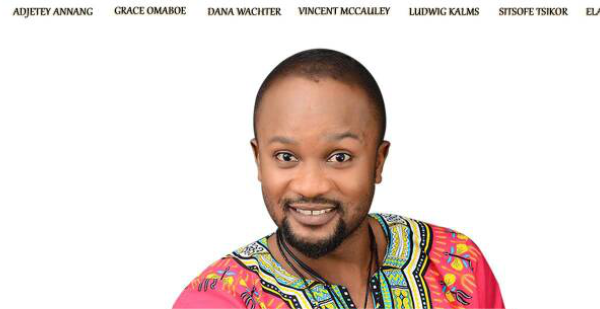 Ghanaian actor, Ludwig Mawuli Agbezuhlor popularly known as Ludwig Kalms rose to fame after participating in the 2007 edition of The Next Movie Star.

Mentored by Veteran actor, David Dontoh, the father-of-one has worked with some of Ghana’s award-winning producers including Shirley Frimpong Manso and Leila Djansi.

Ludwig has also acted alongside the likes of Adjetey Anang, Nadia Buari, Ama K. Abebresse, Pete Edochie and on and on and on.

Ludwig is a graduate of the University of Ghana with a degree in Theatre Arts and Political Science.
Off the screens, Ludwig works with Births and Deaths registry as the Municipal Director at the GA central municipal Assembly.

Ludwig Kalms plays the role of “Kwame” in MY VERY GHANAIAN WEDDING due to be premièred on the 6th of October 2017 at the Silverbird cinemas.

Kwame is the life of the party. He loves to live life and expresses himself quite well through his positive, happy demeanor.
In an exclusive interview with Pulse Ghana’s Portia Arthur, Ludwig revealed that young actors have much to learn from the veterans such as Maame Dokono, David Dontoh, Dzifa among others.

“I think it’s time we the young actors learn from our predecessors. I watch my Maame Dokono on the set of My Very Ghanaian Wedding and I felt goose bumps all over my body. They act with so much passion. And when they hear of stories that depict our Ghanaian culture, they get excited and on set you can’t just beat them. They take the lines and make it their own. I remember David Dontoh and me on Leila Djansi’s film… Like cotton twines. He was also just amazing. But I must say most of us the young ones are picking our lessons and I believe soon we shall all get there”.

Ludwig urged movie producers and directors to find creative ways of disseminating their contents across instead of the nude scenes.

“I don’t think nudity is that important if there are several ways to send the same message across to our audience?
As Ghanaians, we are not noted for exposing ourselves so if clothes on can still send the message across, I don’t see the reason why we need to take clothes off”.

He lauded stakeholders in the movie industry and called on them promote the industry through rich Ghanaian stories.
“Ghanaian Movie industry is getting there, a lot of our films have made it to international film festivals these films tell our African stories and there are no nudity stuff in them but they are selling our country out there.

So if we build a strong institution which will stand for the film industry and concentrate on producing Ghanaian contents, I think the future is bright for us. We as an industry need to let the government recognize our role in promoting development and contributing to the country’s economy so that investors can find our industry as a potential business venture”.
Talking about his latest movie, My Very Ghanaian Movie, Ludwig disclosed that “I always want to associate myself with films that talk about our African or Ghanaian culture and as a producer, I couldn’t say no to this script when Helel smith told me about his intentions on writing this story”.

First, the story is well written and meets the international standards of script writing for movies.

The crew behind the production, well educated in their fields, and are just better. The Quality of the movie is better than most of the local ones. Also a mixture of great actors and upcoming ones, who understands and knows their crafts very well.
We have an experienced editor, Director, and producer, who’s has worked outside of the country before so bringing all that together makes MVGW different.

All the cast that got involved with My Very Ghanaian Movie, I must say are unique in character. They all found their real life characteristics in the roles they played.

They loved the script and they were excited to be working with the team. The six friends in this film are very good friends in real life so you can imagine how real it was for us all.

My Very Ghanaian Movie is a romantic comedy that seeks to showcase a lot about Ghanaian wedding.
As the producer I want to appreciate everyone that worked on this project and I urge everyone to come see the beauty of a a Ghanaian Wedding.

Watch trailer for My Very Ghanaian Wedding below.

Keteke Makes it on to Six International Airlines