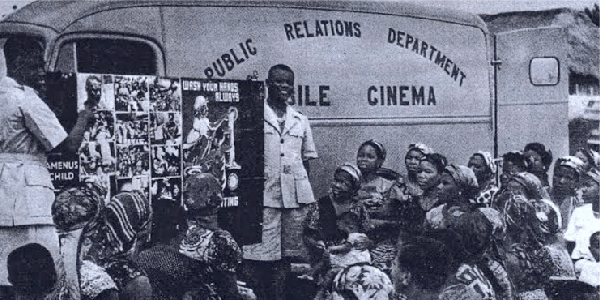 Most of the films shown to native Gold Coasters during World War II (1939-1945) were newsreels and documentaries which were well designed propaganda films aimed at winning the people of the Gold Coast’s support for the British colonial war effects. Furthermore, cinema during the war also reinforced colonial authority over the native people by presenting films that called attention to generosity, colonial development efforts and to justify their colonial rule (Paris, 2002).

By the start of the WWII in 1939, the British colonialists believed that film surpassed any other invention since it had enormous potential in terms of propaganda (Waley, 1942). The General Post Office (GPO) replaced the Film Unit of the Empire Marketing Board (EMB) in London in 1938; which was the British Colonial Film Unit (BCFU) under the aegis of the Ministry of Information, “the department responsible for government wartime documentaries” (Waley, 1942, p 605). The British Colonies produced films initially from a central production unit in Rhodesia (now Zimbabwe), East Africa called the Central African Film Unit (CAFU), supported by the Rhodesia Information services (RIS) Film Unit. Thirty years before African countries gained independence, the CAFU and RIS produced and distributed hundreds of films across Anglophone Africa. These films were shown to African audiences via mobile cinema units of every colony’s respective Information Services Department. The CAFU served two main purposes during the war, (1) “to emphasis on what the white Europeans contributed to the quality of life of Africans, in effect, justifying their presence in Africa as the sole agents of progress and improvement” and (2) an agenda for cinema that was integrated with other media-newspapers, magazines, radio and many information bureaux for direct propaganda to influence opinions and attitudes of local people about the war and to encourage recruitment and financial and material support (Waley, 1942; Wilson, 1944; Killingray, 1982; Holbrook, 1985) as cited in Nanbigne (2011).

At beginning of the war, the Information Services Department (ISD) of the Gold Coast was established in Accra to convey information, newsreels and other films about the ongoing war to the people. Mobile cinema vans were used across the country acquired by the ISD. A local interpreter run commentary over a film in a local dialect showing to local audiences, The term “Aban Cine” meaning government cinema became popular like “Sillma Ife” in Nigeria; film shown included slapstick films featuring Charlie Chaplin, pictures from the war and other developmental films about the colonies. The ISD distributed many films including those of the CAFU and RIS. Ghanaian filmmaker, Egbert Adjesu reports in Nanbigne (2011), that cinema was used by the colonialists in the Gold Coast to propagate news about the war to win the sympathies and support of the local people to get them to contribute young and strongmen and other materials to support the British war effort. He said that cinema was used as a part of an intensive multi-media campaign propaganda to win the support of the natives for Britain. Adjesu recounts fond memories of some communal film screenings where a popular slogan “BBB” which stood for “Buy British Bombers to Bomb Berlin” reflected the ideological orientations of the types of films shown to local audiences.

This was to convince people to accept and support the British cause during the war and also to encourage financial, material contributions to purchase combat weapons for the war against the villains in Berlin. Hodson (1940), reports that the Governor of the Gold Coast wrote enthusiastically about the amount of support the chiefs, headmen and the local people offered to the war effort. Not everyone supported British in their war efforts; Holbrook (1985) argues that many locals had the view that the war was a Whiteman’s war thus it had nothing to do with them.

Moreover a lot of their able bodied and energetic men were departing leading to the loss of man power for farming activities in the villages and towns. Just a few men volunteered for the war so the British had to use other tactics like issuing quotas for chiefs, forced conscriptions and appropriation of technical man-power from mining companies and cocoa farms to recruit more people. Adjesu remembers when he was a student at the Achimota Secondary school in Accra; the American and British soldiers partially turned the school into a military base which led to many boarding students, forced out of the campus. Students were tasked to gather and crack palm kernel to produce oil to fuel their war vehicles; harvesting of rubber, which was used to manufacture vehicle tyres for military transport. Many films of the period also portrayed Ghanaian soldiers on the war front in an enduring, fortified and valour position fighting Britain’s enemies. This was an attempt to lure men into the force and also to contribute palm kernel and other crops to the army (Nanbigne, 2011).

Due to the shift of film policy from educational to wartime films during the interwar years, it lead to a significant increase in film production in the colonies resulting in financial strain on the British Empire. In order to relieve the Central Film Unit from this financial burden, individual film units were set up in the various colonies in the early 1940s tasked to finance and produce their own films but still controlled by the British and other foreign staff adhering to colonial policies of Britain. This was done through an arrangement under The Raw Stock Scheme where film equipments and film stocks were sent to the colonies for film production and the footages taken back to London for processing. The Gold Coast Film Unit (GCFU) established in 1946, was one of such units which collaborated with the ISD and some private film theatres like the African Pictures Ltd. which served as regular venue for film screenings.