GUESTBLOG: How Ghanaian Filmmakers Can Win An Oscar® - My Opinion 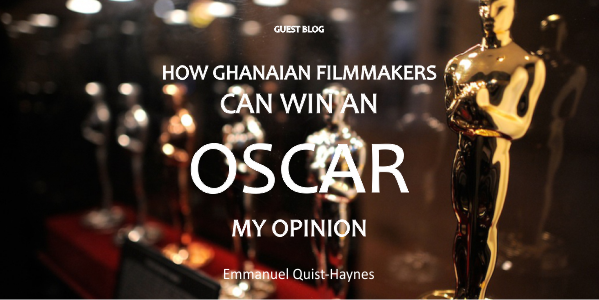 One of the most enviable award trophies in cinema which every filmmaker aspires to win in their life time is the Academy Award® popularly known as the Oscar®. Every year many films across the world submit films to the Academy of Motion Picture Arts and Sciences (AMPAS) in the USA for consideration for the prestigious award.

The process of submitting films for consideration for the award is even difficult for just a nomination. It is even extremely difficult for African filmmakers to send their films because of the challenges they have to endure in their various film industries. Some of the challenges include lack of proper funding for films; the absence of film policies; lack of modern sophisticated equipments; very few professionally trained filmmakers, technical personnel and film producers; lack of soundstages and back lots for filming. Despite these challenges, it has not stopped some African filmmakers from submitting their films for consideration.

Films must be of the highest technical quality and must follow very stringent entry and eligibility rules spelt out by the Academy (AMPAS) before it can be considered for the award. For instance, according to the two following rules; Academy eligibility rule 3 states that ‘a film must be released in the previous calendar year, from midnight at the start of 1 January to midnight at the end of 31 December, in Los Angeles County, California, USA to qualify (except for the Best Foreign Language Film category). Rule 2 states that a film must be feature-length, defines as a minimum of 40 minutes, except for shot subject films and it must be submitted either on a 35mm or 70mm film print or in 24 frames or 48 frames progressive scan digital cinema format with native resolution not less 1280×720.’(www.oscars.org).

As at 2014, only three African films from three African countries have won four Oscars and two African actresses wining totalling six Oscars for the continent. Three Oscars in the Best Foreign Language Film category (Algeria’s 1969 film, Z  by Costa Gavras, La Côte d’Ivoire’s 1976 film, La Victoire en Chantant by Jean Jacques Amaud and South Africa’s 2005 film, Tsotsi by (Gavin Hood), one in the Best Editing category (won by a French editor, Françoise Bonnot) for the film Z (1969) and two in the Best Actress category (South African, Charlize Theron for the 2004 film Monster by Patty Jenkins and the other in the Best Supporting Actress category (Lupita N’yongo, Mexican born Kenyan) for Steve McQueen’s 2013 film 12 Years a Slave. A South African student, Tristan Holmes won the Student Academy Award for Best Foreign Film for his 2006 film Elalini. Other films and individuals who have been nominated but not won include Le Bal (1983) by Ettore Scola-Algeria, Poussi ères de Vie (1995) by Rachid Bouchareb-Algeria, Yesterday (2004) by Darrell Roodt-South Africa, Indigènes (2006) by Rachid Bouchareb-Algeria and Horsla-loi (2010) by Rachid Bouchareb-Algeria, Djimon Hounsou (Benin) for Best Actor for the 2003 film In America and Best Supporting Actor in Blood Diamond (2005) Barkhad Adbi (Somali) for Best Actor for the 2013 film Captain Phillips, Charlize Theron for Best Actress for the 2005 film North Country etc.

Ghanaian filmmakers can take advantage of the category for Best Foreign Language Film because it is easier to submit films for that category in my view, other than the main stream categories especially when films must first be released in Los Angeles before they are considered. An interesting thing to note is that, if a film submitted for the Best Foreign Language Film and is to compete in all the other major categories like, directing, acting, writing, editing, production design, costume design etc, the film must still be released commercially in Los Angeles County. The following are points that I have drawn up which in my view would increases the chances of Ghanaian filmmakers of winning the Oscar if considered carefully before submitting films for consideration to AMPAS.

Lupita N’yongo with her Oscar in 2014

The Academy Award® of Merit

The Academy Award of merit also known as the Oscars is an American ceremony honouring excellence in cinematic achievement in the film industry. The first Oscars were presented on 16th May 1929 at a private dinner at the Hollywood Roosevelt Hotel and are given out annually by the Academy of Motion Picture Arts and Sciences (AMPAS). The Academy of Motion Picture Arts and Sciences is a professional honorary organization made up of close to 6,000 film professionals dedicated to the advancement of the arts and sciences of motion pictures (Essex, 1999). Majority of its members are based in the USA but membership is open to qualified filmmakers around the world. Membership is obtained by being invited by the Board of Governors of AMPAS on behalf of Academy Branch Executive Committees. A person must have achieved a competitive Oscar nomination or an Academy member may submit a name based on other significant contribution to cinema. The incumbent President is John Bailey. The immediate past President was Cheryl Boone Isaacs and is the first African American and third woman to head the Academyy (www.Goldderby.com).

Voters of the Oscars

The Academy is made up of 5,783 voting membership as of 2012 (Cohen, 2008). The Academy is divided into 17 branches representing different disciplines in the film industry. Members may not belong to more than one branch. The branches include Actors, Casting Directors, Cinematographers, Costume Designers, Designers (Art Directors), Directors, Documentary, Executives, Film Editors, Make UP and Hairstyling, Music, Producers, Public Relations, Short Films and Animations, Sound, Writers and Visual Effects.

Actors constitute the largest voting bloc numbering 1,311. Members whose work do not fall within one of the 17 branches may belong to a group known as “Members at Large”. This is how the Academy votes for Oscars; for most categories, members from each of the branches vote to determine the nominees only in their respective categories (i.e. only directors vote directors, actors vote actors, editors vote editors etc.). There are some exceptions in certain categories like Foreign Language Film, Documentary and Animated Feature Film where films are selected by special screening committees made up of members from all branches. In the case of Best Picture, nominees are selected by all members for that category. Foreign language films submitted must include English subtitled and each country can only submit one film per year. Winners are then determined by a second round of voting in most categories including Best Picture.

Ownership of the Oscar Statuette

Since 1950, the Oscar statuettes have been legally encumbered by requirements that neither winners nor their heirs may sell the statuettes without first offering to sell them back to the Academy for US$1.00. If a winner refuses to agree to this stipulation, then the Academy keeps the statuette. Oscar awards not protected by this agreement have been sold in public auctions and private deals for six-figure sums (www.oscars.com)

The BAFTA Trophy for achievements in Film, TV and Video Game

The British Academy of Film and Television Arts (BAFTA) also holds a popularly award scheme for film known as the British Academy Film Awards aka BAFTA Film Awards the equivalent of the Oscars in the USA. BAFTA also holds similar awards for Television and Video Games. Ghanaian filmmakers should also aspire to also win this award and other credible international awards. The suggested points above also apply to the BAFTA awards as well and any other international award outside, but eligibility rules and entry rules may differ from one award scheme to the other. The Boy Kumasenu (1952) the first feature film produced in Ghana (then called the Gold Coast) directed by Sean Graham is the first and only Ghanaian film till date to be nominated for the BAFTA for Best Film from any Source at the 1953 ceremony (IMDb.com).

(Ownership of the Oscar statuette)

I hereby acknowledge receipt of Academy Regulations for use of the Academy Award statuette and the phrase “Academy Award(s)” in advertising. In consideration of the signing of a similar agreement by other Academy Award nominees, I agree to comply with said regulations. I understand that on (date) I may receive from you a replica of your copyrighted statuette, commonly known as the “Oscar,” as an award for (category) – (film title). I acknowledge that my receipt of said replica does not entitle me to any right whatever in your copyright, trade-mark and service-mark of said statuette and that only the physical replica itself shall belong to me. In consideration of your delivering said replica to me, I agree to comply with your rules and regulations respecting its use and not to sell or otherwise dispose of it or any other “Oscar” replica I have been awarded or have received, nor permit it or any other “Oscar” replica I have been awarded or have received to be sold or disposed of by operation of law, without first offering to sell it to you for the sum of $1.00. You shall have thirty days after any such offer is made to you within which to accept it. This agreement shall be binding not only on me, but also on my heirs, legatees, executors, administrators, estate, successors and assigns. My legatees and heirs shall have the right to acquire any “Oscar” statuette replica I have received, if it becomes part of my estate, subject to this agreement.

I agree that if I have heretofore received any Academy trophy I shall be bound by this receipt and agreement with the same force and effect as though I had executed and delivered the same in consideration of receiving such trophy.” (Academy Bylaws, Article VIII, Section 7.)

SPECIAL RULES FOR THE

A foreign language film is defined as a feature-length motion picture (defined as over 40 minutes) produced outside the United States of America with a predominantly non-English dialogue track. Animated and documentary feature films are permitted.

The audio in a Digital Cinema Package (DCP) is typically 5.1 or 7.1 channels of discrete audio. The minimum for a non-mono configuration of the audio shall be three channels as Left, Center, Right (a Left/Right configuration is not acceptable in a theatrical environment).