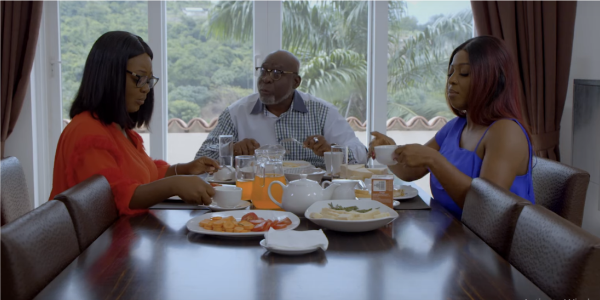 Courtesy of MTECH Communications, we got invited to the private screening for “A Husband For Daddy” the first film to be released on their new online cinema platform MooVee Online (www.moovee.movie) that official went live on the 26th of July 2019.

The film written and directed by Shirley Frimpong Manso and executive produced by MTECH Communications tells the story of two sisters who have to bring their potential men home for marriage to please their father in his ailing health. But in trying to fulfill their father’s wish they are faced with many challenges that could either strengthen or worsen their bond with each other.

Yvonne Okoro & James Gardner in A Husband For Daddy (2019)

The film focuses much on the love lives of the two sisters and their relationship with their father as they both search for a man to bring home. The casting of Jackie Appiah and Yvonne Okoro as twin sister was well thought out. The two complemented each other in their roles with neither out-shinning the other. Their on-screen chemistry was perfect and that was even felt in their visible sibling rivalry and banters.

The siblings appear to be polar opposites of each other. Jackie Appiah who plays Sandra is a quiet and reserved church girl who quotes scriptures at the least provocation whilst Yvonne Okoro on the other hand plays Belinda, the wild party girl with a foul mouth and mean personality. The film does well to exploit what makes both of these characters individually tick and what influences their actions. But towards the climax it reveals how much they are more like each other.

Edward Agyekum Kufour in A Husband For Daddy (2019)

The choice of supporting cast for this film was well thought out in our opinion. Very noticeable was how Edward Agyekum Kufour awed us with his role as the family’s butler. His composure, diction and delivery were flawless in that regard and it was delight to see his performance in each scene he appeared in.

Also, budding talent Anthony Woode stole some of the spotlight with his few minutes on screen. He played the role of a pastor seeking the hand of Sandra. And he was absolute flawless and hilarious in his delivery of that character.

As the story progresses, we get to see the sisters in go through various emotions as their ideas of what their ideal man is challenged and questioned at each turn. In the end, it is evident that they are both not sure exactly what they want in a man, as is it is with many people who set out to find a life partner.

All though we felt some of the scenes dragged a bit longer than we hoped for the quality of acting complemented by the quality of production elements put together makes it easier to sit through.

We at GhMoviefreak.com rated this film 7.5/10 after passing it through our rating scale. It didn’t set out to be too serious of a drama or a watered-down romantic comedy.  Ye it provides enough humor, wit and hilarious carefully placed one-liners to keep you entertained with every scene.

A Husband for daddy is absolutely worth your time and money and is a good film you will best enjoyed in the company of your significant other. It lives up to the expectations and the pedigree of Shirley Frimpong Manso and her works as a filmmaker.

You too can get to see both parts of this film on the all new MooVee Online (www.moovee.movie) platform starting the 26th of July 2019 for only 10 Ghc, payable through MTN Mobile Money and all acceptably known modes of online payment.

The release of “A husband for Daddy” by MTECH Communications through this platform which is truly the birth of a new cinema experience, indeed provides what feels like the start of a lasting solution to the digital distribution woes of Ghanaian films for patrons both home and abroad. Certainly, this is a move that needs to be accepted and supported.

Do well to share with us your thoughts on this film in the comments section below. You can also add your voice to our rating for this film by choosing between 1 to 5 stars in in the user rating section below.