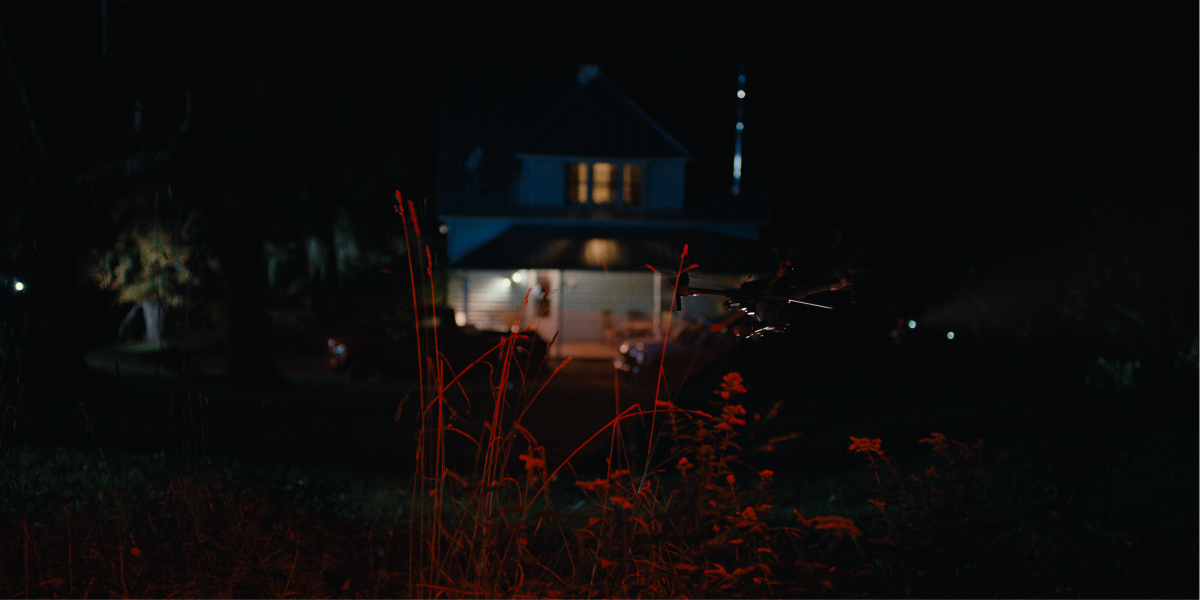 Set in a dystopian America where all people who aren’t straight, white, Christian and cisgender are kept track of by the government with bar codes. ‘American Insurrection’ shows a bleak glimpse of a  portrait that may be uncomfortable for many.

William Sullivan co-writes and directed this cautionary tale which focuses on a few of the resistance fighters of this fictional America led by a right-wing racist.

In the film, a group of these detractors gather in a safe house waiting for an opportunity to escape across the border into Canada.  Besides the drones, their biggest threat is the ‘Volunteers’; a rapidly expanding white supremacist hate group.

The Volunteers started off as a neighbourhood watch committee with over time grows into a heinous organized militia that is hunting down, tracking and oppressing anyone who is not white, straight, and Christian.

Sarah (Sarah Wharton) and her husband, Jarret (Jarret Kerr) are activists who are helping their Muslim friend Zabi (Nadine Malou) and her husband David (Nick Westrate). Zabi lost her family in a Mosque bombing. The group hide together in a farmhouse close to the border waiting for a signal for a clear and safe route to cross the border safely.

As they wait for their opportunity to escape, the film serves heavy dialogue mostly berating the viewer with confusing dogma and counter arguments pertaining to this fictional America the film presents. Some flashbacks are used to reveal some more details of the characters and their past. Almost as if to serve as fillers for some plot holes, but they don’t give. they give enough clarity, however.

Zabi and Gabe (Michael Raymond-James) who is chained in the barn are mostly engaged in lengthy conversation in almost every scene that they both appear together in. They share their conflicting opinions and stance making it clear their dislike for each other and their way of thinking.  Their scenes and several others seem to drag on for much longer than you would hope for. But that seems to be exactly how the director intended for the story to be told.

The film also introduces some other characters that add different layers of complexity to the story.  As tensions build, the group have their own internal conflicts and drama that further put them at risk of being discovered by the Volunteers.

There is an ominous score that keeps you antsy expecting something unexpected to happen. Disappointingly, we don’t get to see enough action at all. Perhaps with a much bigger budget, there would have been enough action sequences which would have added a lot more excitement to the film.

What works most for this film is the acting. The talents are great to watch. Each holds their own with the screen time they get and execute the character well enough to give meaning to the story they are telling. Their situations might not be directly relatable for you, but you find yourself understanding their frustrations and then you can full empathize with them. They do enough to even sell the confusing political narratives.

As an indie film, it is well made. From sights, sound and even special and visual effects. You get immediately that there was some intent to make this much bigger than it turned out to be. Perhaps, with a little more action a much easy to digest character arcs, this would have been a little closer to perfect.

I would score it 5/10. The socio-political commentary served in this film possibly projects where the world and not just America could be heading to in no time soon. If there ever is a world like this, it would be a terrible place to live for everyone in it regardless of their political or religious beliefs.

‘American Insurrection‘ was released on all VOD platforms on October 8, 2021, do go check it out.

Movie Review: ‘Angel by Thursday’ – a pure labor of love.