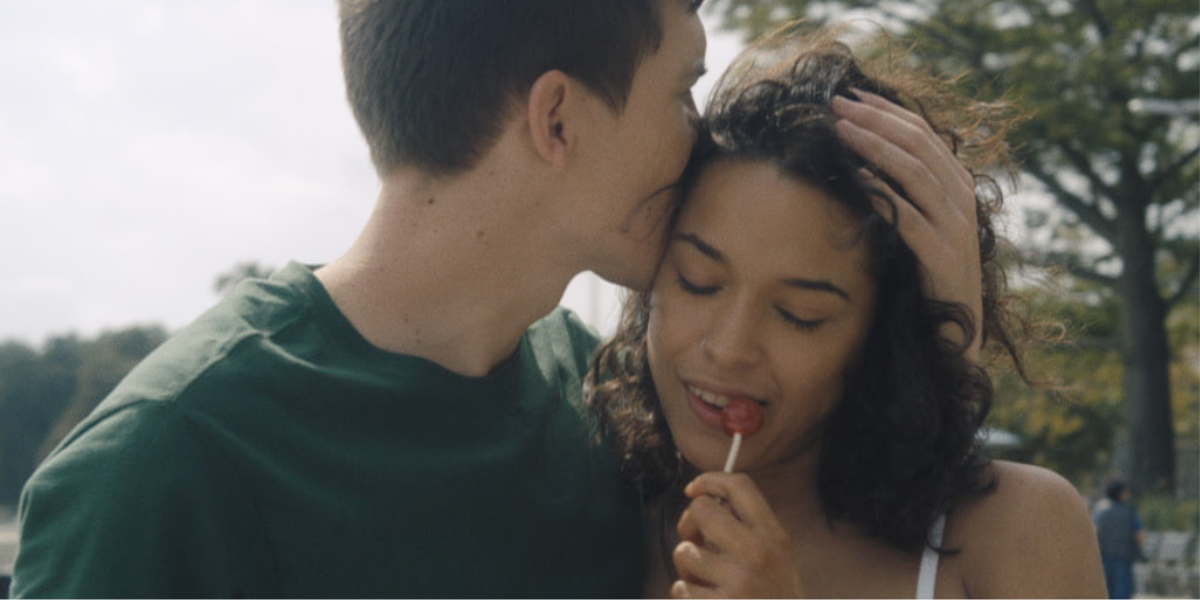 Angelfish – is a classic boy meets girl story set in the Bronx. Brendan (Jimi Stanton)and Eva are a young couple from two completely different backgrounds, they fall in love and are faced with pressure from their lives, family and dreams for the future that threaten to tear their young and fragile love apart.

The acting from the two leads conveys a lot even beyond what’s easily picked up from their dialogue. The onscreen chemistry and affection between those two is strong and feels very genuine. How it is all captured in this film makes it even more believable and appreciable.

Brendan is dealing with an unconcerned, alcoholic single parent who would rather give her attention to her boyfriend than her sons. He also has to keep an eye out for Connor (Stanley Simons), his delinquent junior brother who is slowly slipping into a life of crime. He is left second guessing everything decision he wants to make for fear of failure. With the absence of a father figure in his life he relies on his superior at the deli he works in for advice and counsel.

Eva on the other hand is born to a close-knit family. With a hard-working single mum and a brother confined to a wheelchair, she is constantly under pressure to give her best. She is torn between accepting her mother’s decision for her to go to college and her desire to pursue a career in acting.

For anyone not familiar with Destiny Frasqueri aka Princess Nokia this is a great introduction to her as it was for me. She is vulnerable, full of charm and very likeable in this film. The character she plays presents a contrasting confused, emotionally distraught and timid version of herself from what you typically hear in her music and from here real-life as an activist.

Even with more of the film appearing to be leaning more towards Brendan’s backstory and family drama, Eva stands out well enough courtesy of Princess Nokia’s performance.

The film itself is set in the 1990s Bronx and does great at capturing the right sights and sounds to detail that era whiles masking out everything present day or current in the simplest of ways. The references to the era are very subtitle and almost nonexistent but they are there. The beauty in this film lies in how it stays uniquely original yet still with a modern and timeless tone. You notice the 90s feel from the homes of the two families, how they commute and go about their daily lives as well as how they ware costumed.

Also, some of the cultural dynamics and diversity amongst the people in Bronx is seen in this film. Both Brendan and Eva are of different race yet they are both presented with some form of adversity from their families once they get to know that they are dating someone from a different race.

The tight shots also give you a feel of the pressure and tension that the situations they find themselves in seems to mount on them. Almost as if they are each running out of time and the entire world is closing in on them… you can also perceive them both losing it from the inside looking for some form of escape. The only time you see their worries fade are in the shots where they are seen enjoying each other’s company as their affection for each other grows.

It’s as though when they are together, they become each other’s only focus and everything else seems like a distraction. The frames and shots used on them widen and it appears they are beginning to let loose and forget their worries as they each find some form of escape in the other. The grip life has on them loosens and they appear carefree for the time being. All this detail is beautifully and artistically capture by the cinematography and is well accentuated by the choice of sound score and music for those scenes.

The biggest test for the love that this young couple shares is the battle between the family and the dreams that they each have for the future. In the end they each must make a decision that they would be willing to live the rest of their lives with even of it means losings the other.

Overall, it is compelling story told by Peter Andrew Lee that allows you to settle in at your own pace. I would rate Angelfish 7/10. Its delivers exactly on what it promised, an interesting love story. The story is simple and presented in a very modest way, however it is moving in a way that makes you respect it. And also, it does great at reminding you that love will always find us if we give it a chance.

Maybe I missed it or it just wasn’t there but I was hoping to see how the title ‘Angelfish‘ would be somehow explained by the film.

You too can watch Angelfish as it is available for streaming on Tubi.