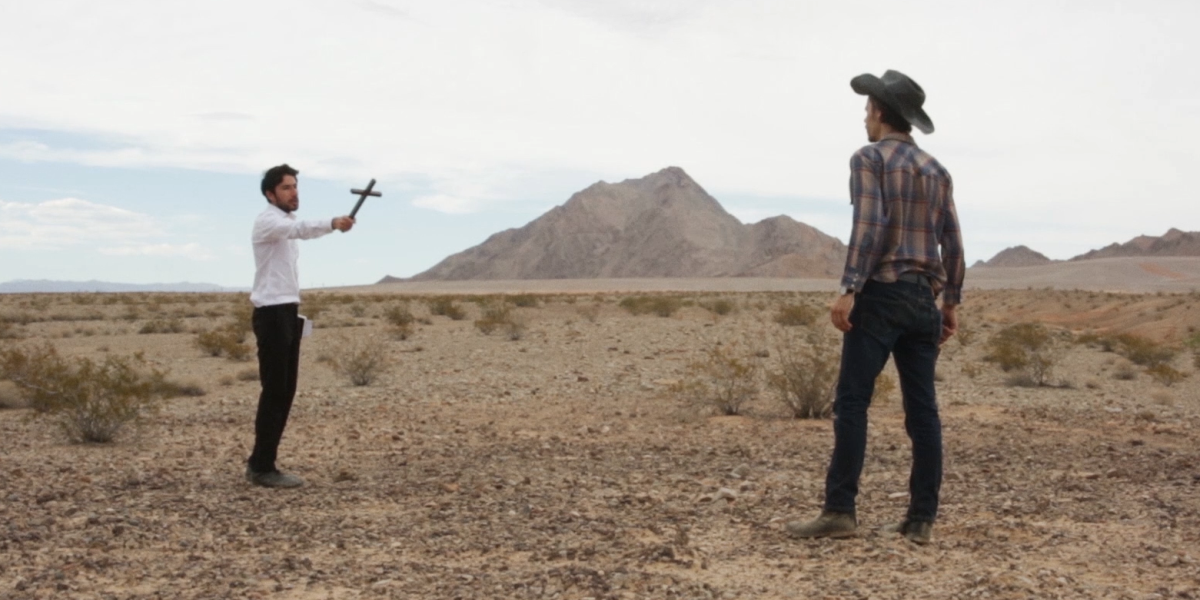 Some indie films start off as pet projects or buddies just goofing around. But what seems like buddies goofing around could be heavy with thought-provoking dialogue about faith and religion. That would be the best way to describe “Baphomet Mountain“.

But should it be taken any serious? That would be left for each viewer to decide for themselves.

The film’s synopsis reads as .. ‘A bizarre religious zealot sets out for Las Vegas to find his younger brother, who he believes to be kidnapped by a cult that worships the deity figure Baphomet out in the Nevada desert. Along the way, he picks up a hitchhiking country and western folk singer, who might be the key to finding the mysterious cult. The journey these two set upon together will force them to face their inner fate, wandering from the murky depths of the City of Sin and all the way out to No Man’s Land, to the edge of sanity and illusion.’

The film and its story are carried through by Jeremy Reyes and Austin Burnette Mitchell who both co-wrote and co-directed.

Jeremy Reyes plays Jesus Boy, a believer looking for his lost brother. Austin Burnette Mitchell on the other hand stars as Country Boy, a folk singer on a journey to reconnect with a lover he hasn’t seen in a long time. They meet by chance as Country is a hitchhiker.

Both Reyes and Mitchell appear to know what they are doing and hoping to achieve with this film. It’s almost as though their energies are on the same wavelength and they both deliver equally to make this film what it is.

Jesus Boy is a staunch believer of God and his power. He doesn’t spare any chance to evangelize, even when it makes him look crazy and delusional. But he is more than overzealous at making sure that whoever grants him audience is left questioning their own moral code. There is a scene where he walks into a room where a group of believers are having a bible studying meeting, his utterances and rants leave everyone confused and somewhat afraid, to the point that they all decided to throw him out after initially welcoming him in.

Country Boy on the other hand moves about unperturbed and carefree about faith or religion. He himself admits that he is lost but he is not in a hurry to find his way home or just doesn’t care where home really is.

The pair seem like complete polar opposites of each other. Providing some form of reflection of what the world currently is. Where there are constant clashes between believers and non-believers.

The acting from the two is quite decent. It is hard to even notice that a greater part of this film was improvised whilst shooting and not scripted. Both Reyes and Mitchell manage to stay in character throughout even when you have to deliver a lengthy monologue that is riddled sometimes wired unfathomable rumbling.

You can’t help but appreciate the use of ambient noise in this film. All the scenes are accompanied by some background noise that doesn’t either drown out the dialogue or make the intermittent silence any more deafening. You are provided with a better appreciation of the location choices and every other factor that contributes to making the scenes more realistic. Whether it is hushed conversations in the other room or natural external ambience from rushing winds or passing vehicles.

You are very much likely to hear the name “Baphomet” more than two dozen times in this film. And I tried counting but gave up after a while. At times it fell like Baphomet was being summoned and was likely to appear. At other points, it’s hard to differentiate between what is real or just an illusion.  Or you are left wondering if the characters are simply just crazy.

Baphomet Mountain is different and has the markings that are, the look and feel of an indie film with a zero budget but a message that needs to be delivered.  It is safe to say that it would be a tough film to sit through especially for anyone who isn’t interested in the religious nuances and cryptic undertones that Baphomet Mountain is ladened with.

It is a film that can be only best enjoyed whilst it’s being explained to you by the makers. I would rate it 5/10 stars. For an indie project of its kind, it stays focused on its message and intent and sees it right through to the end regardless of how weird it gets at some points.