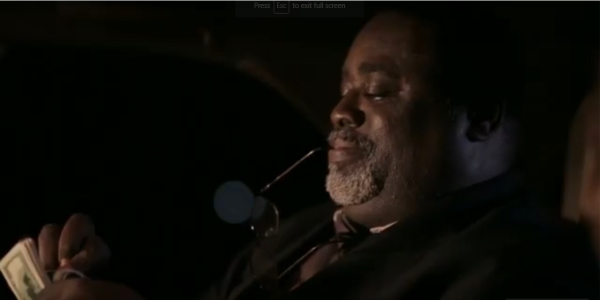 In a democratic dispensation we all have our roles as citizens to play for the good of the country and that includes making sure our leaders are held accountable at all times. As creatives, we can do that with film as well. Especially in these times when we seem to be sitting on time bomb with the issues surrounding vigilantism and private militias. It is important all facets of the conversation are explored to prevent the worst from happening. For us at GhMoviefreak.com we feel this film couldn’t have come at any better time as it contributes to an ongoing national conversation.

BIGMAN WAHALA focuses on a corrupt government minister trying to escape the military in the aftermath of a coup d’état. He enlists the help of a struggling taxi driver to make it to the border and their conversations and encounters during their journey reveals so much about themselves and events leading up to that point.

Oscar Provencal plays “The Bigman”, a minister of state in this film with so much experience. There is a reason why he is seen as one of the finest actors in this country and his performance in this film is testament to that. John Tijani also proves he’s a good new prospect with his role as Honest, the taxi driver in this film. We believe we are yet to see the best of him as an actor. He delivers well on the role, sticking well to an unpolished pidgin English in his dialogue and delivering well on all the presumptions of what a not so educated, struggling taxi driver would be. You could almost share in his shock and confusion at certain turns of the story.

The other characters were also well delivered and it was a delight seeing veteran actor, Fred Amugi’s contribution to the story being told, although it wasn’t much screen time.

You could appreciate the Ghana Armed Forces’ contribution to this film with the vehicles and arms used. Although some of the actors who played soldiers appeared quite sloppy and clumsy with their weapons handling skills.

The writer and director, Daniel Ajokatcher did good at making sure the film does not in any way forwardly suggest what could happen in the country anytime in the future. The story from the start, doesn’t give up what year it is set in, but the screenplay tends to give a feel that it is set in the past and not the present or future. Well, at least until the point where a calendar in one of the scenes places all the events to be happening in the year 2001. It then becomes confusing to place several of the vehicles we see in the film, mobile phones as well as some other props the characters were using within that year.

It’s always important to research the time period thoroughly and leave little to chance when making a period piece so as to portray a more realistic world without confusing the viewer, especially with key props that become focal points of the scene.

The sound was impeccably done in this production, with all the dialogues very audible, giving us a better appreciation of the actors and their delivery even in the scenes we would have expected to have been very noisy. You don’t get over burdened with a sound score throughout the film, and the relative background silence in most of the scenes contributed to the intense feel it needed. Of course, for a film about a man trying to save his life by escaping from not just his crimes but his conscience as well, the intensity at some points was very much needed.

GhMoviefreak.com rates this film 7/10 for the story it tells and the quality of acting as well as the production. It does a fair job at cautioning us of the ills that come with a coup d’état without having to be overly violent and graphic. It also reminds us that we are all complicit in our woes as a nation by failing to hold our leaders accountable at each turn whilst enabling them to perpetuate acts of corruption.

The film generally does enough to prick the conscience of anyone who sits in any office of power. It’s clearly difficult to please everyone but it’s imperative that we all do our parts no matter how little to ensure our nations growth and also to prevent us from ever getting to that point were acts of violence like a coup become necessary.

If you have seen “BIGMAN WAHALA”, share with us your comments or thoughts on it in the comments section below. If you are yet to see it, this one is worth the time so don’t hesitate to go see it as it is still showing at the Silverbird cinemas over the weekend.