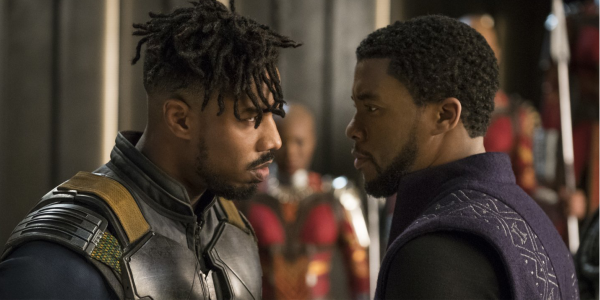 Black Panther is the first black super hero in “mainstream” comics so it comes as no surprise how it is being received across the world. It also happens to be one of the very few big budget Hollywood films that has all lead characters being black.

Obviously since this is a film based on a comic book character, you should know Wakanda is a mythical place that is set in the hearts of Africa. Yet to be discovered by the world it’s a power nation capable of dominating the rest of the world in wealth and technology. Something that cannot be actually said about any African country yet.

The exposition in the opening scene is all you need to know to get a better understanding of the film. Although it would have helped more if you have seen the other marvel films that feature the Black Panther. The narration breaks down the story of the people of Wakanda and the monarch of the Black Panther. It also explains the power and wealth of the people of Wakanda and sets you up for the amazing action-packed adventure that highlights, greed, disloyalty and power struggle. Certainly, everyday occurrences that us African’s are used to. The beauty here is how these everyday occurrences are shown in a very different way in a somewhat uncolonized Africa.

Rarely do we get to see films that show any part of this continent in a positive light. Having a strong economic standing or being a highly advanced civilization in anyway. The entire film seems to suggest what Africa could have become if it hadn’t been stripped of its man power and resources by colonization.

The entire African aura around this film doesn’t pin point any particular African tribe, but the influence is very clear. And you can feel and see very relatable African culture from various parts of the continent in this film. Ryan Coogler’s screenplay does well to capture more than enough of the sights and sounds of African culture to make the aesthetic feel of this film very authentic. Even in the scenes with the out of the world technological advancements that Wakanda has to offer, the African element is still there and very much authentically expressed.

Loyalty and royalty is in our very existence but we seem to have forgotten and this film has a way of reminding us all of that too. Wakanda is made up of 4 tribes with distinct styles and cultural ways yet the essence of royalty and regality is not lost in this film. The tribes come together and collectively protect themselves from the outside world.

Even the Dora Milaje, (some elite spear baring warrior women who protect Black Panther) appear very relatable. They seem to depict the strength and bravely of African women in general. There are several African tribes with history of strong courageous women who went on to lead and win battles for their people. Like the story of our own Yaa Asantewa, and you could easily feel the connection in this film.

The villain, Killmonger (played by Michael B. Jordan) turns out to be one of the villains you end up liking by the end of the film. Regardless of him being the bad guy, he oozes a valiant persona that in so many ways align with the thoughts of most Africans, especially those in the diaspora. That is, the thoughts of aggressively – beyond reproach taking over what is rightfully ours by right as Africans.  By the end of the film Killmonger felt like a variant of T’Challa with the same desire but a different approach.

So far it seems like Black Panther is the only marvel superhero with a very unique backstory that feels deeper, very relatable and this somewhat further humanizes the character. The rest have been a bit too far away from home. But this standalone film carries a strong theme the succeeds at making it not just an engaging and engrossing adventure but also delivers a refreshing disposition for black love and black power.

We would rate this film a well-deserved 8.5/10. We can only anticipate the impact the black panther character goes on to have to have on the entire marvel universe, especially in Avengers: Infinity Wars later on this year.

The entire feeling of this film kind of gives you a sneak peek at what it would feel like seeing big screen interpretations of actual African heroes and heroines from our stories and folktales. And we can only hope that we would get to that point where us Africans being the Kings and Queens that we really are have total control over how our stories are told.

A lot of people would argue that why should we be excited about this film, after all its success would only profit Hollywood. But the truth is …it’s been a long time coming and this feels like the beginning of a new era of black excellence. Which we undoubtedly have to embrace and celebrate. After all film gives us that power to redefine ourselves and change the narrative.

For any skeptic out there, Black Panther is definitely worth the hype and this review doesn’t do it justice enough. Just make sure you go see it and you won’t be disappointed.