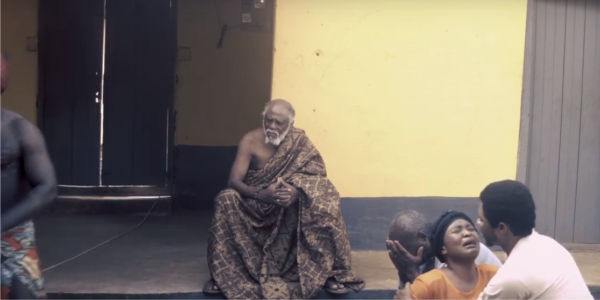 The film’s Synopsis reads as following; In August 1964, a serial killer is on the loose in a small village. A school teacher leads the war in unearthing the mysterious killings. Fate meets destiny when the hunter becomes the prey.

The trailer also sets you up for an adventure of some sort. And the idea of a hunt for a serial killer in 60’s of Ghana is enough to get anyone’s attention. We rarely get to see stories of such nature in our films. So, it’s always an adrenaline rush to get to see such stories.

The small community is taken by surprised by rampant murders of young women. The scare sends the entire community into a frenzy of fear and panic. It takes the voice and actions of one school teacher, Timothy (played by to Nonso Diobi) to spur the people on. But his zeal leads him commit a mistake that is enough to tarnish his reputation. Although he finds solace in his love interest Esaaba (played by Eve Esin), there is no guarantee for him that she is someone he can trust and rely on always.

The equivocal and commanding presence of Emmanuel France playing the role of the chief in the community is strong and well felt in his delivery. He lords over the people with wise counsel even in the midst of constant tragedy and fear.

Although the film’s synopsis clearly sets the story in the 60’s, the costuming and props and even some of the dialogue doesn’t reflect that era properly. The inaccuracies in the choice of costuming seemed to have taken a lot from the story for us. For something that was marketed as thriller and a period piece, we expected that we are thrown into that period and be forced to relive events in that era in totality.

Costuming and props are vital in completing the setting for any film, especially when the story is depicting a specific time and place. We noticed some of the characters disappointingly adorned in hair extensions, artificial nails and facial make up that didn’t exist in that era.

The intensity of the elements of crime and thrill that were supposed to be the central theme of the film was watered down by some comedy. Although the laughs were very much needed entertainment value for the film but it’s still diluted some of the seriousness that this film needed to have. At most points it felt more like a romantic comedy with tragic elements than a crime thriller. This dragged the film on longer than it should have been.

The story seemed to have derailed from its focus with a slow-paced build up to the climax. We are thrown into an unexpected whirlwind romance with the characters Timothy and Esaaba where the focus isn’t on the central plot of the serial killer and the hunt for him by the people of the community. The subplot adds a different perspective to the film and reveals its other messages of love, trust and how external influences can negative offset the course of a happy marriage.

We would rate this film 5/10 after running it through our rating scale. Its 2hrs 20 mins runtime is succeeds at keeping you occupied. Albeit it’s many lows, it builds up steadily to a high by the time it climaxes.

The final twist in the plot leading to the climax was worth the wait. It put a lot of the details revealed in the film to perspective.

The title seems to be lost in translation as we kept wondering why the film is titled “BLUE.” And the director’s explanation of “BLUE” as as ‘Bad Omen Looming Under Experience’ wasn’t well explained and drummed home by the end of the film.

BLUE is still showing at the Silverbird Cinemas, so you should make some time to go see it. Also be on the look at for the film’s premiere in the Watch & Dine Cinemas in Kumasi. Share with us your thoughts and comments on it in the comments section alone.
Don’t forget you too can also add your voice to our rating for this film by choosing between 1 to 5 stars in the user rating section below.