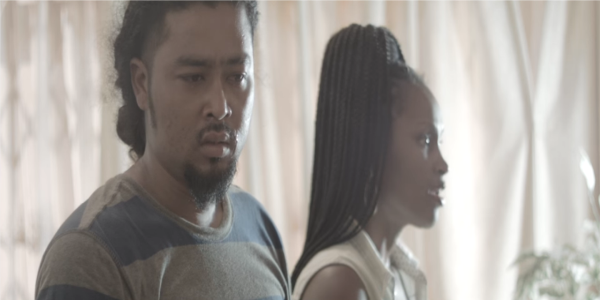 We finally got the chance to see this film even though it premiered late 2015 and as usual, we decided to share our thoughts on it.

Casper’s Energy is a decent psychological thriller that deploys a little bit of the paranormal to tell a story about love,  crime, deceit and betrayal.

Casper dies mysteriously in the company of his friends at the beach. He wakes up the following morning and after going by his normal morning routine he meets a stranger who draws his attention to the fact that he (Casper) no longer exists physically in the human world.  Now trapped in the spirit world, he has no choice but to enlist the help of this stranger to help find answers surrounding his death and also fight to return back to human form.

We admire the “outside the box” thinking that led to the development of this script.  There are not that many Ghanaian films that attempt to talk about metaphysics and abstract concepts affixed in a typical Ghanaian setting.

On the surface you would think this film would just be some form of horror with frights and scares to send chills down your spine. It actually turns out to be a thought provoking drama that requires open-mindedness to enjoy. Yes, a free thinking open mind, that’s exactly what you need to have to enjoy entertainment pertaining to paranormal activities such as what this film talks about.

This Abu Idi directed film stars Tony Hanssen as Casper. He managed to have and maintain a lost/confused demeanor that was necessary to compliment the idea of his character having an out of body experience.

The film also boasts of performances from Jeffery Nortey, Paulina Oduro, Umar Krupp, Vincent E. Maccauley Jr, Salma Mumin and other supporting casts. The performances were averagely decent. But we took notice of both Jeffery Nortey and Tinell Dickens who particularly impressed us with their delivery.

The cinematography and editing styles used in this film gave it enough of the paranormal feel it needed to have. We also liked the visual effects that were used in making our ghost characters pass through objects and also possess bodies.  Although it was decently executed, it wasn’t consistent throughout. There were several scenes which had our ghost characters comfortably leaning or touching objects without going through them. This was a bit confusing and in some ways put holes in certain parts of the films script.

We also feel that the film’s title was too forward and plain about the films paranormal theme. Everyone who grew up in the 90’s might be familiar with popular animation and film “Casper” that was about a friendly ghost. This film’s title “Casper’s Energy” and theme sort of plays around that. Hence making it very appear a bit too bland. Not that this affected the quality of this film and its story in anyway, but we feel it would have sufficed if it had a title that wasn’t outrightly expressive.

Also, a lot of the dialogue appeared to have been dubbed externally. The ADR wasn’t as fluid as it should have been so in several scenes that involved multiple characters speaking, it sounded as if they were each on different volume levels.  There was also the dog barking sound effect that accompanied the scenes set in Casper’s home which felt very out of place and slightly irritating.

We also feel the films crime theme could have been better accentuated with some flashback scenes. This could have given more depth to the backstories of some of the characters and also better clarified some of the discoveries and secrets uncovered by Casper (especially in the final scenes) as the film progressed.

We would give this film a fair 6.2/10 rating considering how challenging it might have proved to attempt an abstract theme such as this.

The film needed to have a more intense griping feel about it which was kind of marred by some of the characters being funny.  Although they were not outright hilarious, the tiny bits of humor did make us laugh and ruined the intense vibe which needed to be progressively maintained from start to finish.

The attempt at a script like this alone is commendable and definitely worth this review.

If you haven’t seen this film, be on the lookout as it might be released on DVD sometime soon.