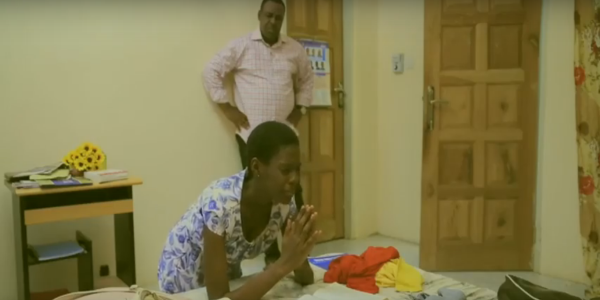 If there is anything in particular that our film industry lacks now, it would be movies made independently and backed by religious bodies.  Of course there are several films that have been made with the intend of projecting the ideologies of a particular faith system, but none recognizable,  that can be said to be made with the consent and contribution of the leaders of any particular religious group.

The Apostolic Church of Ghana over the weekend premiered Catch them Young; heavily Christian themed film that intends to remind Christians of the power of prayer. It tells the story of two separate households troubled by various marital situations and how it negatively affects their kids.

The beauty of this film lies in how well it’s able to present a story that mirrors happenings in most Christian homes. Happenings that are most often hushed out by our mundane attempts to always appear pious and infallible especially in the eyes of our fellow Christians.

It’s very laudable that the Apostolic Church of Ghana decided to use film as a medium to spread the gospel.  The potential to reach many is unlimited through this medium provided all stops are pulled in making sure than nothing but the best in delivered in terms of production quality and content as well.

As much as the acting in this movie was a bit stale in most of the scenes, we have Naana Hayford, Paulina Oduro and Dan Tei Mensah to thank for their excellent delivery of their characters. Obviously because of the experience they have. Noticeable amongst the young cast was, Kora Irene Dzebee who impressed us with her portrayal of disturbed daughter see. She does have some talent that can be natured.

Most of the dialogue in this movie was too lengthy and appeared more like recitals than actual believable utterances from a conversation.  We could attribute this to the inexperienced nature of most of the cast especially the young ones. But then we also feel a lot could have been done to the script to have made it bit more comfortable and less verbose.

Despite the audio being muffled in some scenes and casual accidental interferences of the actors and their microphones, we were still impressed with the over quality of the sound in this movie. Especially from the market scenes that otherwise could have been affected by a lot of external factors.

We commend the directorial efforts of Jonathan Essel who also wrote this film, and are certainly interested in seeing what else he has to offer in his subsequent projects.

GhMoviefreak.com would rate this movie a fair 5/10. Because its biggest strength is the message it intends to deliver. And the screenplay succeeds at doing that fairly.

Religion is always a very dicey subject to talk about with and can be very difficult to package and make wholesome enough for non-believers especially. We are excited about seeing more movies of this kind, backed by the leaders of the various religious groups. Our film industry does need all the help it can get.

Catch them Young is not only entertaining as a film, it is also encouraging as it subliminally tunes your mind to the power of prayer and the need to have faith.

We are sure regardless of your religious stance; this movie is something you wouldn’t mind spending time to see.