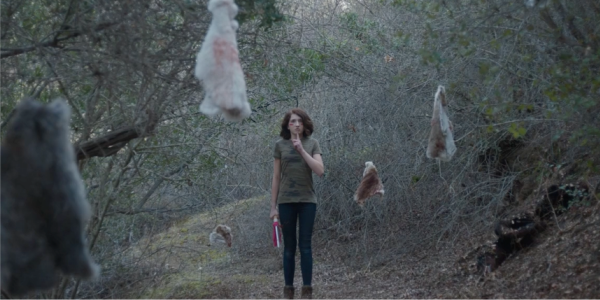 I have always believed that the best horror flicks are the ones that play with your mind and play with your thoughts and perception. And that is a huge gamble most times for the makers of such films. This film does that in its own way. You are kept wondering what is going and on and that somehow moves you close to fear.

“Come Said the Night” starts with a father (Lew Temple) and his two young children driving up to their home in the woods. It’s been a year since the death of his oldest daughter and their moods are somber and reflective. We get to see periodic flashbacks of the eldest daughter and how she related to each of the younger siblings. As the story builds up, more details are revealed about the dead daughter, their mom and how they both lost their lives.

Lew Temple plays Roy, the father, an old hippy who prays to pagan gods and constantly talks about mythically creatures. His influence and control are glaring on the kids. He seems to have subtly forced his doctrines and beliefs on the kids. Sprout (Nicole Moorea Sherman), the 13-year-old believes that their family is being threatened by a gorgon that seems to only exist in her mind. She finds the strength to fight her fears but that only leads her to uncover more unexpected fears.

All the 3 characters at the center of the story seem to be battling with some nightmares and sleep paralyses that gives you the impression that something or someone is coming after them.

The entire film is a slow burner, even by the first 40minutes mark you are not really certain how the story is going. It requires rapt attention to the dialogue and scene after scene the full picture stars to take form and you eventually understand the story.

The aesthetics in this film are decent and does justice to the story. There seem to be some beauty and calm in the woods. The calm and quiet nature of the woods seems to also add a lot to the horror vibe that this film needed to have to be complete. You hear the sound of the wind rushing through the trees and you are left wondering who is there or what is about to happen.

Director Andres Rovira tells this story with a slow pace that could leave you confused and bored at some points. But he’s able to keep you hooked on, wanted to know how things would end.

I would rate this film 5.9/10. It starts slow, builds up steadily and requires a lot of attention. But the climax is worth the journey. The twist at the end is fulfilling and satisfies all the entertainment expectations going in to the film.

The film is available on digital streaming platforms like Amazon, iTunes, inDemand, DIRECTV, Vudu, Vimeo on Demand and the likes starting, August 20th courtesy, DarkCoast. So, you too should check it out if you haven’t seen it.

If you have already seen it, share with us your thoughts on it in the comments section below.