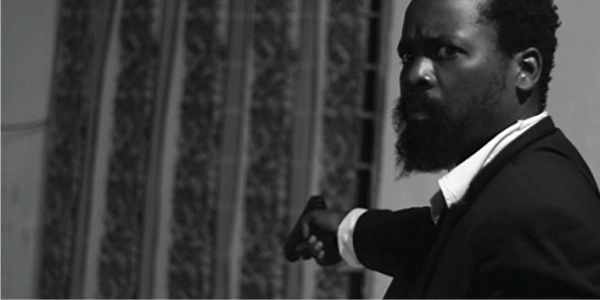 This year’s edition of the Black Star International Film Festival opened today Friday, 18th of August 2017 in all its glory. For us as film enthusiasts, our excitement lies in the fact that BSIFF in many ways highlights both the strengths and weakness of our own film industry. Whilst subtly forcing our film makers to rethink certain assertions as well as aspire to step out of the boundaries that hold our industry down.

Amongst the tall list of films, both short and feature length that screened on the opening day, we’ve chosen to write about Hamadi Mwapachu’s Dar Noir.

Dar Noir, is noir styled film set in the hearts of the Tanzanian capital, Dar es Salaam. It details the life of a junkie detective on a downward spiral who finds redemption only after falling in love with a prostitute who sees nothing but the good in him. Their progress is halted as their paths cross with a notorious drug dealer who is on the hunt for his stolen drugs and a missing shipment of sex workers.

Idealistically, a plot like this would seem like a high octane fast paced roller coaster ride. But Director Hamadi Mwapachu who also doubles as the lead in this film manages to use a slow-paced screenplay to tell a story of this nature in the most intriguing and captivating way possible.

This film brings to bare a style of film making which is almost nonexistent in the Ghanaian space of film making. We say this with no malice or ill intent but there certainly aren’t that many films of Ghanaian origin that can be compared to the style used in this film.  For a film that is centered on the decays of morality and all kinds of vices like prostitution and drug abuse, it does all this without necessarily having to be sexually provocative, unnecessarily violent or explicitly loud. These are typically the key ingredients in most Ghanaian films that are centered on subjects of crime.

Dar Noir, takes a very unconventional approach. “Unconventional” in the Ghanaian sense of film making. Even the development of the story captures enough details about the lead character without leaving any single aspect of the story or the supporting cast out. Even in the process of cleaning himself of his drug addiction, we are not left out of the mental and psychological battle he has to face in order to persevere. And then we see the transition into a better version of himself even his physical appearance. You don’t have to be a professional film maker to notice the depth of the lead characters backstory and what role it plays in solidifying of his presence as the lead as the film progresses.

Although clearly shot on a lean, “not fancy” in anyway type of budget (which you can clearly pick up from the production), this film succeeds at holding the viewer hostage within its almost 2hrs runtime. The power it holds is not just in the story it tells but how it manages to tell it in the almost laid back sluggish manner.

Yes, the film did seem quite sluggish with some very long scenes that came with a little too much dialogue at some points. Fortunately, by the climax of the film all the dialogue seemed to have properly severed its intent as it added several more layers to the depth of this film’s story. Basically, the situations within the film and the story itself is made clearer as it progresses and the dialogue contributed largely towards that.  Even the most random of statements belted out by any of the supporting actors made some sense in the end… that is if you pay enough attention.

Although the film is in Swahili we could still appreciate the mild levels of sarcasm used in its dialogue through the subtitles. You can’t help but let out an occasional giggle even in some of the lengthiest of scenes.

The beauty in this film lies in its rawness and grittiness. It unapologetically exudes a live style of crime, drugs and prostitution being an actual way of life in the capital of Tanzania during the time it was made. Although it’s all captured in mild proportions in the visuals it is still clear and evident in the films theme. After all, as is very typical of most noir films, you find yourself torn between loving and then also hating the same vices that consume the characters even if its their bane of existence. It isn’t a film that seeks to glorify crime or any of societies vices, but it evidently captures and chronicles a certain era in the lives of everyday Tanzanian’s dealing with these vices in several ways.

The predominantly “Tanzanian hip-hop” infused sound score in several ways spices up this film’s dark yet ambivalent vibe that it needed to have.

Arguably, it was bit difficult to follow the sequence of events because the screenplay didn’t specifically give off a clear timeline or time frame for most of the events the occur in this film.

Although certainly not the best of quality in terms of production, Dar Noir delivers on the story it chose to tell.  regardless of the amateuristic acting from some of the supporting cast, it really delivered at keeping us attentive and interested from start to finish. That is why we would rate the film a very much deserved 7.5/10 rating.

This film presents a clear case of letting the story speak for itself without having to apply too much theatrics to over compensate for a story that lacks substance.

We could be wrong, but maybe if Dar Noir was a Ghanaian film it would have been too loud, unnecessarily violent or over sexualized in all its dramatic sense. Maybe we need to start applying different styles for telling our most basic of stories without having to over glorify the vices we wish to speak up against… Maybe just then we could really make a difference…. Maybe just, MAYBE!!

Watch Trailer for Dar Noir Below

Anyways the Black Star International Film Festival continues over the weekend with screenings from over 45 countries at the Silverbird Cinema, Accra Mall, African Regent Hotel, Achimota Mall and James Town, Mantse Agbona.  Do well to get a day’s pass HERE to enjoy all the subsequent screenings.