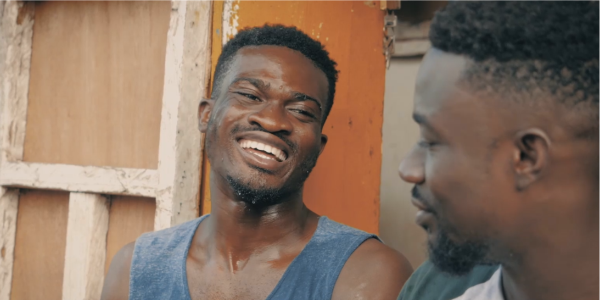 We finally got to see ‘Divine 419 Hawkers Hustle’ when it screened at this year’s Black Star International Festival where it also won the coveted ‘Africa Rising’ award.

In Divine 419 Hawkers Hustle, Kwame is a struggling orphan living with his uncle, a quasi-religious man who is doing his best take care of him and his own son. He chooses to hawk on the streets whilst entertaining the possibility of attending an acting school and making a career out of his talent. Josh, his friend and confidant who is a staunch church goer provides him all the encouragement and support.  Until they are both robbed and they hatch up a scheme to use Christianity and miracles as a cover to swindle unsuspecting people.

Armed with his bible, a P.A system, a strong resolve to succeed and his acting talent, Kwame with the help of Josh succeed multiple times at taking crowds hostage, stealing their attention with their fake miracles and getting them to willingly part with a few notes or coins.

For them the scam seems like the only means to an end. They start small and get good it at. The crowds they attract get bigger and it’s only a matter of time before they are spotted by someone who might have already encountered them.

Fiifi Neizer‘s performance is convincing in this film; he sells the idea of a frustrated young man who is pushed by circumstances to do anything to secure his future. The ‘bromance’ he shares with Evan Eghan’s character, Josh, is enviable as they made a good pair. This film also stars Bex Agbeko Mortty and Rhoda Okobea Ampene.

Johannes Krug‘s story highlights what could be a possible reality of the many street preachers we see on the streets of Accra. It is a constant mental hustle trying to identify which of them could possibly a genuine man of God or someone looking for believers to take advantage of. It also projects how these street scams translates into bigger grand schemes when some of these supposed men of God are able to gather for themselves a large congregation and loyal following.

We would rate this short film, 3.9 out of 5 stars. With about 30 mins run time, it does great at pricking your thoughts on Christianity and religion as a whole and its role in making our lives better.

The climax of the film leaves things unresolved. You are left wondering what the next step would be for the two young men and how far next they are willing to go with the scam. A perfect set up for a great story that could reveal so much about the ‘hustle’ called religion.

Divine 419 Hawkers Hustle, has the makings of a decent extended series or a solid feature film that exploits more on the subject matter of Christianity and how people are possibly misguided by it. It tackles a delicate subject in a nice way without having to be loud.

If you have seen this short film share with us your comments on it in the comments section below if not, it should be on your list of films to see.