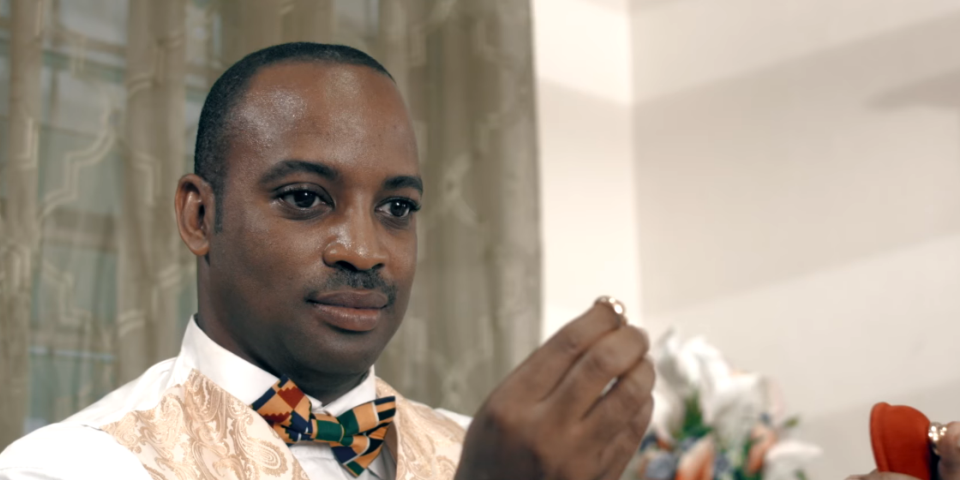 My very Ghanaian wedding is a romantic comedy about a Ghanaian man who is engaged to a Ghanaian woman chosen by his mother, falls in love with a beautiful stranger on the weekend of his friend’s wedding.

The entire film’s story details happenings in the lives of a group of friends over the space of a weekend leading up to the big wedding ceremony. There’s Joojo (played by Vincent E. McCauley) who is about to get married to the love of his life Marian (played by Sitsofe Tsikor). And there is Paul (played by Adjetey Anang) who is arranged to marry Joojo’s cousin, he meets a Spanish lady under awkward circumstances. He hates the sight of her at first but slowly he’s drawn in by her personality and he finds himself questioning his stance on so many things he thought he believed.

Although a simple story this film packs such a strong message.  It attempts to blur the lines of cultural divide when it comes to Ghanaian marriages. Although not as prevalent as before there are still some families in Ghana that are not so tolerant of inter-tribal marriages. The argument has always been about losing the essence of tradition as opposed to being with someone you really love. And the film’s plot covers that struggle well enough.

It fits into that pack of films that keep you asking yourself what you do differently if you found yourself in the shoes of any of the characters.

Most of the scenes in this film appeared too long and dragged on with so much dialogue. And because the scenes had little to no ambiance at all in the sound, those scenes got a bit boring at some points. You start to get that “can you get it over with already” feeling.

We also did not like that somehow the film felt a bit more “westernized” than Ghanaian. Especially since we had hoped to see more of a typical Ghanaian wedding ceremony than we got to see. Although some parts of the dialogue between the characters did explain what takes place in a typical Ghanaian engagement ceremony, we still feel like the visuals didn’t show enough of that.

Throughout you would find yourself relating to a lot of the hostility from Paul’s mum (played by Grace Omaboe). Especially if you’ve ever witnessed a situation when the mother of the groom isn’t in support of the marriage. Grace Omaboe is such a delight to watch in this film regardless of the hostile character she plays. And you can’t help but reminisce of some of her classic performances.

Overall, we would rate this film a 6.7/10 rating. It is entertaining and worth the time spent seeing it. The humor elements in this film were spot on can’t be missed by anyone who appreciates sarcasm and wittiness.

We believe the “cinema experience” is not just to entertain the audience but also to give the film maker a deserving platform to showcase all the hard work put into the film in its full glory. The audience takes more than just smiles and good remarks about the films home. They take their impression on the quality of the film as well and based off that, make recommendations to others to go see the film or not. A terrible cinema experience takes away more than it adds to the quality of any film.

There have been several times we have critiqued some films on their editing, cinematography or sound and their defense has usually been that the cinema halls had compromised the quality of their work.

So, we are tempted to ask what went wrong? Maybe there is a problem with Cinema Hall 4 at the Silverbird Cinemas Accra Mall. We could be mistake, but surely, we seem to feel something had gone wrong with what we watched last night as compared to what we had seen at the press screening.

Just like we’ve often argued that heavily flawed production elements could ruin the overall quality of a good film, a terrible cinema experience could do likewise. If filmmakers still have another hurdle to face in terms of making sure their films are seen exactly how they are supposed to be seen, what’s to stop them going back to the days of making films straight to DVD?

Maybe is about time Ghanaian filmmakers, collectively demand and expect better from Silverbird Ghana so if there really is a problem something worthwhile can be done about it. Or maybe we just need more cinemas companies?

Anyways if you haven’t seen My Very Ghanaian Wedding yet, do well to go check it out with your significant other just so you two can have something interesting to debate over.

If you have, do well to share with us your thoughts about the film in the comments section below.