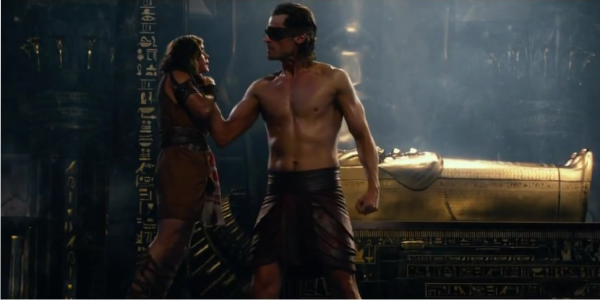 A lot of flak had been thrown at this movie prior to its release. Mainly because, no Egyptians were cast for the story even though it was centered on the people of Egypt. We as movie freaks were obviously still interested in seeing how this story would go and if it was worth all the talk and publicity.

In Gods of Egypt, a Mortal hero Bek (Brenton Thwaites) joins forces with the god Horus (Nikolaj Coaster-Waldau) in an alliance against Set (Gerard Butler), the merciless god of darkness who has taken over Egypt’s throne and is bent on ruining the peaceful and thriving empire with conflict and anarchy.

Of course you should know that this is not fact or history. But certainly mythological fiction.  Overall the storyline seems very basic and not too complex to understand. The movie starts off with a narrative that gives you a little insight into what you are about to see.  Unlike some movies of this kind we have seen, the story does not stray from its original plot or underlying theme so it was a bit too easy to follow. Several movies that would fall in a similar category as this, usually start with long winding tales that tend to leave the viewer confused at most points in the movie. But this title didn’t, it was just too simple and straight forward and in no way intriguing.

The actual acting wasn’t in any way impressive either. Besides getting to see Gerard Butler as a villain and Brandon Thwaites  playing a young daring hero, the acting from the rest of the characters seemed very plain and not commendable.  Although the storyline seemed to have kept a very serious nature and pace right from the start, the dialogue seemed not to be equally intense. There was too much use of sarcasm and bare jokes that seemed to have diluted the seriousness of most of the scenes that required intense dialogue to be complete.  Nonetheless, some of these bits of humor did make us laugh and enjoy the movie a little more.

This movie made use of a lot of CGI effects which is noticed right from the start.  Regardless of the 14

The poor visual effects caused the fight scenes to look like something out of a computer game. Regardless they were pleasurable to watch and gave the needed entertainment we expected to see.  It would have been almost unbearable to sit through all that CGI without any fight scenes to excite you.

We would rate this movie 5/10 because we had very high expectations for it but then it awfully disappointed. Director Alex Proyas who is famous for titles like I, Robot and Knowing could have done much better with this.

We feel this movie could possibly be the biggest box office flop this year. But don’t worry it does serve its purpose of keeping you occupied for its total 127 minutes run time.

Do well to also go see this movie if you haven’t and share with us in the comments section below what you also think about it.

Movie Review: Victor Frankenstein 2015 *The Monster behind the Monster*