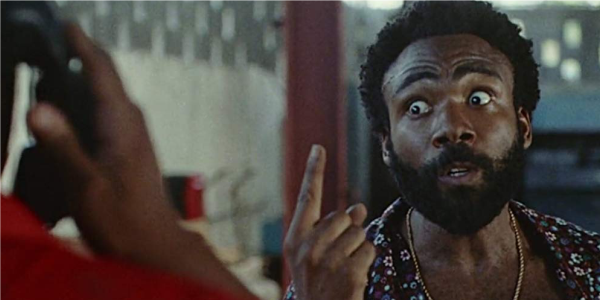 The film’s central plot is about Deni (Donald Glover), a young musician who seeks to liberate the oppressed people of Guava Island by holding a musical festival, a task them seems so simple yet herculean because of the forces he must stand up against and what they stand to lose once the people are liberated.

Donald is paired with Rihanna, who plays the role of Kofi, his love interest from who’s point of view the story appears to be narrated.

The presence and aura of singer Rihanna was not felt that much in this but that can’t be compared to how much of an insignificant character played by Letitia Wright was. The story didn’t give us enough of her and she only seemed like a casting choice made to add some weight and marketability to this film.

Deni Maroon is the most liked and most known person on Guava Island courtesy of his music and his daily appearance on the island’s radio station. He also works at the Red Cargo factories that produces unique fabric and clothes that the Island has become known for. But Red Cargo hasn’t been fair to him and all the people on of the island who are forced to work round the clock to satisfy their capitalist boss. In his mind and possibly his heart, he believes his musical festival could unite the people and cause Red Cargo to do better.

The film presents Deni as a savior who fueled by the love of his home and the desire to see his people treated better.

It felt more like a long music video more than a movie, you know, the kinds that have pauses in the music and some dramatizations of the song’s storyline. If not anything at all the song sequences provide good enough entertainment to make you want to sit through this film.

The writing could have further explored the struggles of Deni, his relationship with Kofi and also the effects his death had on the people of the island. Although the movie climaxes with them celebrating his life, how long will that last for? Was that all was needed to liberate them completely from tyranny of Red Cargo?

Interestingly, a greater part of the story seems to have been completely explained with the animation it started off with. Some details that could have been used in broadening the narrative and steadily developing the characters on-screen were put out in the opening animation as the main plot developed.

The 4:3 aspect ratio and color grading brings some unique beauty to the island and its people. It doesn’t only feel vintage and aesthetically pleasing but also reminiscent of an old classic artsy piece. Leaving you thirsty for more.

I would rate this a fair 6/10. It is absolutely an okay movie to sit through if you have some time to spare.

In some ways it also felt like an extension of Donald Glover’s “This is America” music video, especially with the warehouse scene the seemed like a remake of the original music video.

Guava Island in all, is a brilliant idea with decent execution, but there is no denying that this could have been better, bigger ad forwardly louder than it turned out to be.  It certainly feels like this film was meant to say more than it showed, but it a fair attempt one that you would certainly want to watch more than ones perhaps.

For a film that was rumored as a secret project last year and released as a surprise with big names like Donald and Rihanna, anyone would absolutely be expectant of something not just mind-blowing, but also revolutionary artsy. Maybe Donald Glover and the director Hiro Murai who frequently collaborates with are using this to test the waters whilst they prepare themselves for something bigger