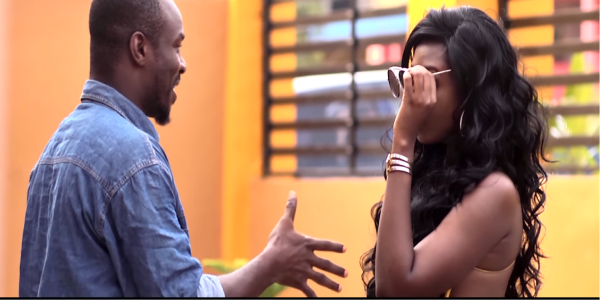 It’s easy for anyone to confuse the title “Heaven Can Wait” to be some religion themed film. But it happens to be a decent comedy filled with bits of drama and romance that takes you on a roller coaster ride intertwining what could have easily been three separate stories into one film.

There is the central story and the underlying theme of this film which is about a slightly dumb and gullible man Apio Richard who is obsessed with his favorite celebrity, Anita Asempa who happens to be dispassionately rude and has a hatred for men as a result of a distasteful experience from her past.

Then there is the story of Yawson, a prince with a life changing secret living a simple life away from the flamboyance of his kingdom who has been trying hard to get attention of his love interest Anita Asempa with the help and counsel of his persistent and very optimistic sister, Rose.

Finally, there is the story of Ato, a smart teen with a bit of a troubled past who is on a self-project to change the world. He preys on Apio’s gullibility and desires by claiming that he is Anita Asempa’s brother. He leverages that to get Apio to help him with his quest to change the world.

The biggest strength of this film would be how it succeeds at almost seamlessly telling these three intertwined stories simultaneously without missing its central theme and capping it off with a climax worthy of its “romantic comedy” tag.

In some of his press rounds leading to the premiere, the director, Abu Iddris mentioned that he originally wrote the script to be a film that would have been directed by Kofi Asamoah.

We could easily see a Kalybos and Ahuofe Patricia type of combination/chemistry in this film considering that they both would have likely been Kofi Asamoah’s pick for the characters Apio Richard and Anita Asante played by Hogan Gabriel and Regina Van Halvert.  That is, if he had made this film.

Hogan Gabriel undoubtedly sufficiently provided the humorous presence that the film needed to have, being that it is a romantic comedy. The wittiness in his delivery coupled with his Nigerian humor played a good enough role in this film. For anyone skeptical about him being a good choice for the lead role in this film…. Get ready to be impressed. Most of the best scenes to make you laugh in this film had him at the center.

Abu Iddris however managed to make this film rightfully his own with his touch and directorial approach. #HCW had quiet the same cinematic feel as his previous projects we’ve seen. He plays well with lighting to set the mood and composition of his shots and it’s seemed to have worked well with this film also.

On the negatives, we didn’t quite agree with Ato’s (the character played by Aaron Adatsi) backstory being explained with a voice over that could have easily been missed by anyone. We feel it would have better sufficed if his back story was captured in the principle dialogue of the character rather in the narrative voice over style that was used.

With a series of unexpected happenings towards the end of the film that gave clarity to some scenes from the earlier bits of the film, we also did not like that the film used a bit too many flashbacks for some scenes. Most of which were from immediate past scenes that were still fresh in our memories. All though the intent for this was to sort of give weight to some of discoveries as they unfolded, those flashbacks felt a bit more like a repetition of scenes that were just there to make the film longer than we felt it needed to be.

We would rate this film 6.2/10 because it served its purpose of providing good laughs accompanied by meaningful life messages. The entire film somewhat talks about never giving up on oneself and also striving to be a better version of yourself.

All though he did deliver, for us, it didn’t quite feel like a story we would have loved to see from the cine-god. Casper’s Energy, Heaven and even You May Kill the Bride (which had a bit of humor) had some elements of either myth, mystery or intrigue that he excellently delivered on. Not to say he can’t be an all-round director but every director has their niche or what they are best known for.

And for us, romantic comedy doesn’t come to mind when we think of an Abu Iddris film. Maybe we would have to see more projects like this from him to be further convinced and we would definitely be looking forward to it.

It felt a bit like what we are sure it would feel like, if James Wan for instance went on to do an outright comedy film.

If you’ve seen HEAVEN CAN WAIT do well to share with us your thoughts on it as well in the comments section below.

If you weren’t at last night’s premiere of Heaven Can Wait do well to drag a couple of friends along to go see it at the Silverbird cinemas as it is still showing this weekend and throughout the following week.

If they ask you why simply say you did it #fortheloveoffilm