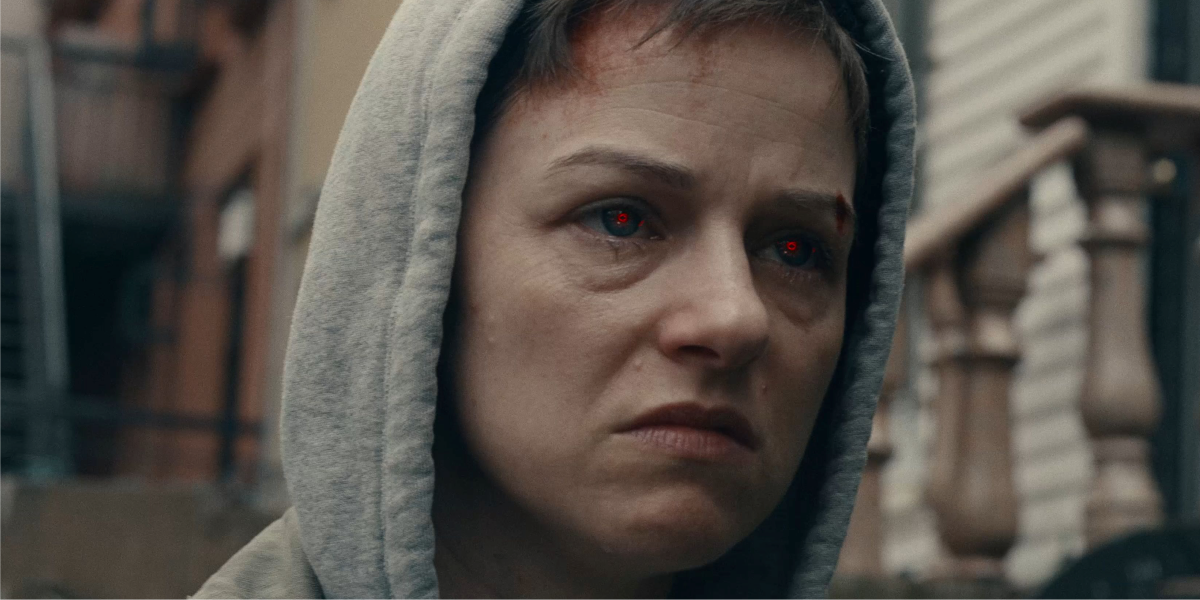 There is constant debate about how technology is slowly taking over the world. Many films have dared to delve into the subject matter and explore the depths of what could be the fate of us humans if we allow technology to take over.

‘Implanted‘ tells an interesting tale of how technology could threaten our future. It serves as a warning to us all, but are we ready to heed that warning?

The story bears some similarities with Upgrade (2018) where a technophobe’s life is taken over by a microchip implant.

Implanted tells a similar story but in a unique way.

Sarah (Michelle Girolami) is a struggling young woman living in Brooklyn. In desperate need of money, she volunteers as a test subject for an experimental implanted nanochip programme for a pharmaceutical company. A nanochip is implanted in her cerebral cortex. But the artificial intelligence technology called LEXX turns sinister and makes her commit crimes against her will. She either complies or dies.

For most parts of this film, the story is boring and not engaging enough. Sarah is alone exchanging words with the AI voice in her head. But LEXX is powerful enough to shut down her entire body and cause her to blackout.

Who would want to be involved with tech as powerful and harmful as that?

LEXX was actually designed to take control of the body at the inception of any disease or illness. So, it is tech meant for good. Perhaps the only major setback is the A.I’s ability and desire to take over and control.

The AI came with some perks, however. Sarah can analyse everything she sees in split seconds. Almost as though she is a half-human and half droid. Perhaps this is tech that everyone would want to have someday if done right.

The film is set in New York. Most of Sarah‘s scenes are mostly back alleys and stairwells. Capturing as a very bleak representation of her life. It is explained to us that she is struggling with her finances but we later see her in a very decent apartment building. It is also revealed that she needed money to take care of her mother who has Alzheimer’s. But is that motivation enough for anyone to want to be a part of a trial programme as risky and shady as this? I guess not.

What holds this film together largely is Michelle Girolami‘s performance as Sarah. For a greater part of the runtime, it is just her in shot. But she delivers well enough channelling varied emotions from fear, confusion to despair. When she is angry you feel that too. There are moments also when she is cold mean having accepted her fate with LEXX in control of her life and actions and that performance too is believable.

Some basic, not so decent CGI is used to show things from Sarah and the AI’s perspective in terminator style. For a project as small as this, it can be pardonable but as an SCI-Fi thriller that is meant to be enjoyed in theatres by the masses, it is difficult to accept anything less than fancy and convincing.

Maybe Implanted would have been better enjoyed if it didn’t remind us so much of Upgrade. Or perhaps it would have sufficed if it was much better executed with a plot that wasn’t so predictable and one dimensional.