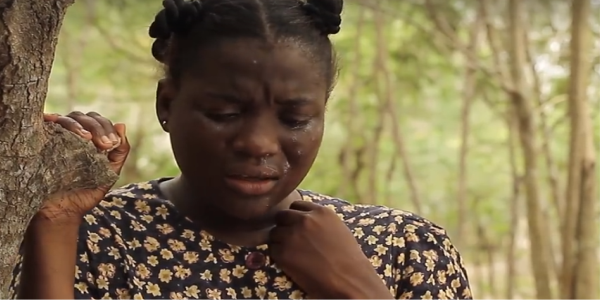 Over the weekend we got to finally see the 2012 released KWEIBA, at an outdoor screening event put together by Artists of Revolution, a coalition of creatives out to push auteur-driven films.

KWEIBA, details the life of an only child loved dearly by her father, we did his best to give her everything despite not being a wealthy man. Kweiba falls in love and everything changes. Their bond as father and daughter is challenged just as her love and affection for the new man in her life is also tested in many ways.

The film is set in the 80’s but the story starts from the 60’s on the rainy night Kweiba was born. She is raised and always shielded by her father as she grows into a beautiful young lady. Until she encounters Kweku Graham. She falls in love with him quickly and is starts to lie to her father. Each day with Kweku in her life presents her with another challenge she must prevail over just to make him happy and to show her love for her.

Kweiba’s love is tested more when Kewku Graham tries to find a job and his employer asks to spend the night with her to secure the job position. And the plot thickens thereafter, revealing more about the personalities of both Kweiba and Kweku Graham.

The film also stars, David Dontoh as Kweiba’s father and also features the eloquent and ever stylish master of ceremonies Kwasi Kyei Darwkah.

This King Luu directed project has a unique touch that sets it aside from any other Ghanaian film that we can recall from the year 2012. The uniqueness lies in the setting, the story and how the actors delivered. It looks and feels crude but still refined and well shot and edited. The story and the characters also fit the setting and the period which the story is about.

The dialogue in this film is a combination of Fanti and English, making it easy to follow the story also making the emotions shared by the characters very relatable.

Also, we felt the film introduced some characters earlier on that could have been used to broaden the story but unfortunately they were never seen or mentioned again in the film. This left all the focus on Kweiba and Kweku Graham for a greater part of the film, especially as their love affair begun to form. These characters who were friends of the two could have been used to diffuse the almost predictable nature of the story.

The story got a bit too emotional for us at some point heading to the end of the turned out to be anticlimax that didn’t expect but gave the story a descent resolution.

The film talks about love, trust, sacrifice and the extremes that it could lead people to.  Its emotional yet entertaining to see with family and loved ones. For a 2012 release, it definitely feels different for that era and it was a story well told and executed but the makers. That’s why we would rate it 6/10. It feels like one of those timeless classics that are best enjoyed on the park on a cold night.

We are expecting to see more films from screenings put together by Artists of Revolution. Follow GhMoviefreak for details on their next screening events and make sure you attend.

If you have seen ‘Kweiba’ do well to share with us your thoughts on it in the comments section below. Don’t forget you too can add your rating to this film using between 1 to 5 stars in the user rating section below.