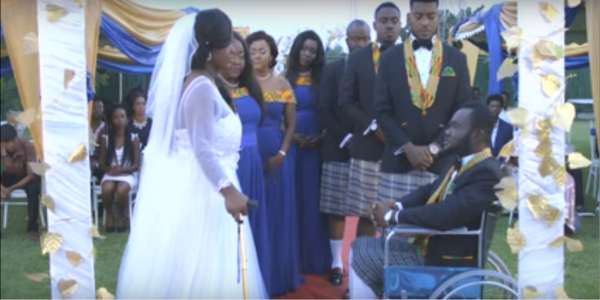 We’ve have had our eyes on this film ever since Director Kobi Rana openly called for the public to show up on location and be part of a wedding scene for his new movie.

We were excited to see how he was going to use the huge crowd that would turn up and what difference that would add to the story.

Happily Never After, tells the story of a troubled couple whose plans of getting married are tested when they each get involved in tragic accidents with a week to their wedding. He loses his legs and she loses her sight. We get to see how this spate of unfortunate events tests the limits of their love for each other and if indeed love does conquer all.

The idea of marriage is always enough to get anyone’s attention regardless of the subject matter or the actual topic of discussion. That is why we can never get tired of romantic movies no matter how monotonous they tend to make relationships and the possible array of challenges they come with seem. This particular story presents a situation no one can dare to think of or even wish for someone else. This is certainly a story worth telling as it has a way of making you question what you would do if you ever found yourself in such a situation.  It’s quite impressive enough that the writer of this movie could think up an emotionally trying  yet mentally complex situation such as this.

One other point of interest for us in this movie was the selection of the cast. We were keen on seeing how our lead characters were going to be used in telling this story and how their individual acting strengths would be perfectly exploited by a script like this.

We seem to agree on the pairing of Jackie Appiah and Prince David Osei for the lead roles of movie. It’s been a while we have seen them in anything together. And  we certainly enjoyed the on screen chemistry they shared in this movie.

It’s always a bit of a letdown when the supporting lead characters of any movie don’t have any backstory of their own. That forces you to wonder why they were put in there in the first place. Not to say that we were disappointed by any of the performances, but it’s quite clear for us that, the excellent pairing of talents for this movie was somewhat under used.

Most of the dialogue seemed too wordy, rehearsed and forced. But then the random use of local dialects and Pidgin/Broken English compensates by making the actors appear more comfortable and relatable to any Ghanaian viewer.

A lot of times, it felt like this movie was intended to remind us of Kobi Rana’s musical talent as well. The main wedding scene that fused shots from the various happenings in the story, for us, only seemed like a plug for his music and dance skills. And besides helping to kill time and sort of entertain the viewer, it really added nothing to the story at that point of the screenplay.

We also feel that all of the accident scenes were a bit too cheesy and poorly done. It would have also sufficed if a little more attention had been given to minor details like props (A blind person uses a white cane and not a walking stick). As much as we find commendable the efforts put into finding reasonable medical backings to explain the conditions that our two lead characters found themselves in, we think expert advice should have been taken from a physiotherapist concerning what kind of treatment/techniques  and a reasonable timeline it would have taken for our lead male character to get healed and fit enough to be running around. (4 weeks isn’t believable enough).

The production elements in this movie were quite decently executed. But for us the entire sequencing of the timeline of the screenplay seemed rushed. This made most aspects of the story line a bit too difficult for us to process and accept.

Happily Never After is a nice story but we seem to think it was told poorly and a lot better could have been done to make it more exceptional.

At this point we are tempted to conclude that Kobi Rana is slowly loosing his grasp on us – film wise. Or is that he has earned so much of big name for himself over the years, that anything he puts out is given twice as much scrutiny? Either which way, we could be wrong.  We are certainly looking forward to another movie from him that knocks some wind out of us.

We would rate this movie a fair 5.2/10 because we expect more from the director. We certainly had very high hopes for this one and it fell a bit shy at delivering to our expectation.

We have learned to take the good with the bad, in this case, the good did come out from something bad. Happily Never After, succeeds at flipping a series of tragic happenings into a lovely story that perfectly concludes that true love does indeed conquer all.