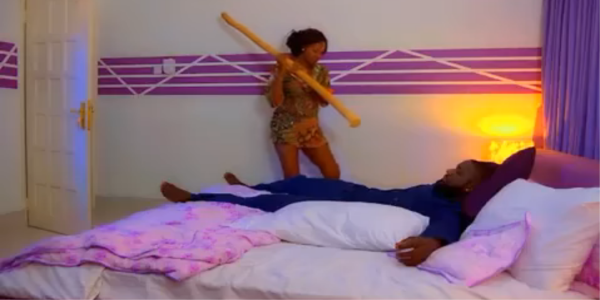 If there is a proven formula for having a sold out film premiere in Ghana, then Kobi Rana must be having a book of formulas stashed away somewhere. Considering that last night was Tuesday and the day after was going to be a working day, no one could have easily predicted that there would be human traffic at the Silverbird Cinemas even on a Valentine’s Day. If there is one thing he doesn’t ever get wrong, it would the extents he goes to get people to come to the cinemas to see his work.

He’s been doing this for too long and getting much better at it every time. In this case, he picked 14thFebruary, the globally accepted day of love, finds the right list of actors to pull enough traction and serves us with a film titled, “I Love You But…”

The cast put together a decent mix of known faces and new ones who all made an effort to impress. We loved seeing Amanda Jissih in this one. She appeared very comfortable in her role and there wasn’t a single sign of her stressing with the character she had been tasked with. Jefferey Nortey has sealed his position on our list of “Top 10 New Faces in Ghanaian Films” (the list is still not complete though, wait for it) with his performance in this film.

For most of the time this film felt like a mash-up of several separates stories.  The main story that was about the characters played by Elikem Kumordzie and Kafui Danku felt as though it had been written and shot entirely for a different film. Not to say this was bad in any way….but… for us, it seemed like it wasn’t going in the same direction as the rest of the film.  Although it also packed some good levels of decent humor,  we feel that plot could have stood alone and  be developed into an average 90 minutes screenplay with supporting back stories that would have eventually better complimented the title “I Love You But…”.

We were hoping that in the end all the stories being told would have been interconnected somehow. But the only thing they had in common was that they were events happening around Valentine’s Day. Well, excerpt the Kafui Danku and Elikem Kumordzie bit which didn’t have any hint whatsoever of the Valentine’s Day theme this movie had.

Also we feel some of the acts/scenes weren’t necessary and appeared like random comedy skits. Like the Jay Kojo Daasebre‘s Iphone 7 scene and Fella Makafui‘s Tundra scene. Although they were absolutely funny and added to humor aspect of the film, they were too random and we didn’t quite get exactly what those scenes intended to add to the actual story being told, besides just trying to make us laugh.

We absolutely loved the choice of songs used in this film. Especially the scene that had the lyrics of the soundtrack matching the dialogue from Elikem Kumordzi’s character.  It added a good dramatic feel to that scene. Again, this felt like another film being used to promote the multi talented Kobi Rana’s music.  We know he is equally talented a musician as he is an actor and film director. But hearing too many songs of his in a film he is primarily involved in just makes it seem like too much effort to force his brand into your subconscious.

Oh and then there was the Mahama Onaapo song.  Carefully placed in the film to give the viewer’s something to laugh about. But wasn’t quite necessary if you ask us.

There were too many characters and sub plots to follow. As much as this made the film more entertaining, it ended with us wondering what happened to some of the other characters and their stories. Surprisingly there were no subtitles for to translate the use of local dialects in most parts of the dialogue. An oversight perhaps but still not pardonable.

Regardless, we seemed to have enjoyed “I love you but…”. It had enough well placed mature humor to keep you entertained through its run time. That is why we would rate this well-deserved 6.2/10.

For us, a perfect film picks a story or subject matter and with the help of production elements uses well developed characters to tell that story and successfully delivers its intended message.  Again this Kobi Rana film failed to do that for us.

This movie had too many things going on. It passes for a decent entertaining film with enough laughs to ensure that you have a nice time at the cinema,  plus it gives you real life relationship situations to have you second guessing your own personal situations … but after that… what else?

We are patiently waiting for that Kobi Rana film the stands the chance of being entered in some International Film Festival.

Movie Review: “One Last Look” at the Overflow Experience.