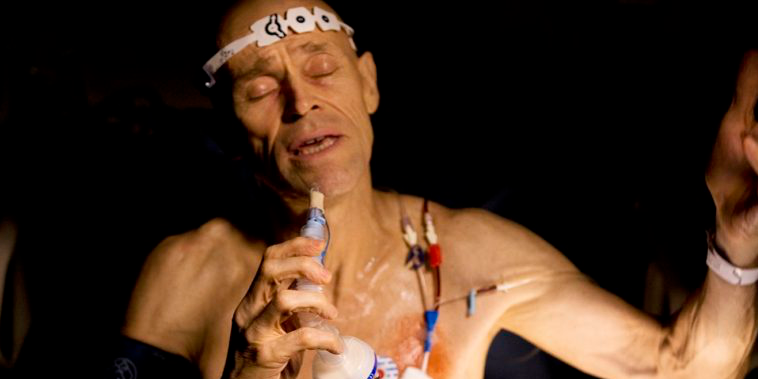 My Hindu Friend, directed by filmmaker Hector Babenco is an autobiographical piece that explores his battle with cancer and how it affected his relationship with family and friends.

The story details the life of Diego, a talented film director with difficulty to deal with his sickness, which is making him lose his friends and family. His best friend and doctor Ricardo gives him the news that he needs a bone marrow transplantation, otherwise he’ll die. He gets married to a beautiful woman, Livia, just before going to Seattle to get treatment. There, he undergoes numerous medical procedures. During treatment, he meets an Hindu boy, with whom he plays and whom he tells amazing stories. Odds are against him and when stakes are the highest, Diego gets a visit from a very strange man.

Willem Dafoe sits comfortably in the center of this film with the character Diego. His performance is stellar as the entire film revolves around this character and is as though the supporting characters are just minor distractions that are easy to ignore.

Even the ‘Hindu Friend’ that the film’s title infers on is almost not noticed for a greater part of the film. You would expect that this story as the title suggests would be about Diego and his ‘Hindu Friend’ but that’s not the case at all. The young boy who Diego encounters whilst going through his treatment barely gets enough screen time to have a significant contribution to the story. They are only seen encountering each other the hospital during treatment and later as they play pretend war from the stories Diego tells like two kids just having a good time. There seems to be no direct bearing, depiction or explanation as to how Diego’s life is affected by the young boy. That could perhaps have given more credence to the choice of title.

Whilst battling with his ailment, Diego is frequently visited by a mysterious man who interacts with him whilst he appears to have passed out as a result of the pain he is experiencing. A character that could be interpreted as death in the form of a corporate executive who has come for Diego. Their conversations reveal a deeper look at Diego’s thoughts about death, his desire to live and is fear of dying without haven’t finished one last film project. Their conversations reveal humane side to Diego who otherwise passes off to be very hard headed, egotistic and almost narcissistic even at the brink of death.

My Hindu Friend is a film that makes you think about life and death and the thin line that exists in between the two. If this film is truly based on events that happened in the life of the Director, Hector Babenco then it is certainly a unique experience worthy of being made into a film as well told as this. It’s easy to mistake this film for one that would leave you spirit low and moody when it starts. The story has some glaring moments of despair but we get to see moments of inspiration as well.

If this is Hector’s bow out from film making then it was well thought-out and decently executed and culminates his career in a way he should be happy and content with. I would rate this film 6.3/10. It is engaging in its own way and has way of making the viewer reflect and feel more appreciative of life and its blessings.

This is a good film if you are looking for something easy going to kill some time without the struggle of mentally unlocking complex twists and story arches.

You too can get to see My Hindu Friend as it has been released digitally on Amazon, iTunes, inDemand, DirecTV, Vudu, Google Play, FANDANGO, Vimeo on Demand, FlixFing, Hoopla, AT&T, Xbox, Sony & Sling/Dish.