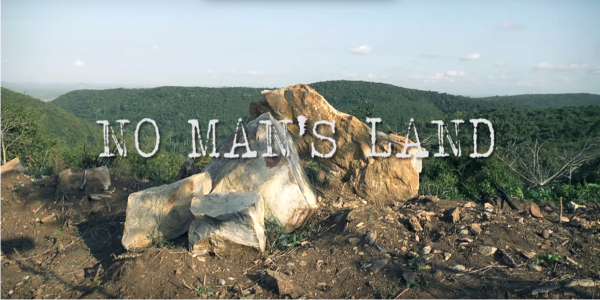 It is very encouraging to see a lot of our actors/actresses in the industry venturing into movie production because the right production can add a lot to improve the overall quality of our movies.

No Man’s Land, tells the story of a Medical doctor who returns to his home land to find out that civil war had split its people into two rival tribes who cannot bare the sights of each other let alone coexist peacefully to ensure the development of their distressed nation.

This Pascal Amanfo story could not have come at a much better time considering that Ghana is only a few months away from general elections.  The scripts underlying message of peace and unity as crucial elements to the development of every nation couldn’t have been drummed into our ears any less louder.

Although the script did not have a direct relation or setting to Ghana, it was certainly relatable thus making its message more resounding.

We loved seeing Adjetey Anang (who played the lead role of Dr. Philip Nyongo) in this movie.  It was good to be reminded of his versatility as an actor especially after the prowess he displayed in his last two movies which were action thrillers. His portrayal of a selfless, courageous and yet still “helpless romantic”  doctor in this movie could certainly win an Oscar. We also loved seeing Salma Mumin (who produced this movie) as Nurse Julia. Her innocent, emotional and vindictive self was equally as impressive and lovable as her fierce, wild and daring characters we have seen her play in most of her movies over the years.  The chemistry between both actors was very good for their roles.  And we appreciate seeing how romance was carefully blended into a story about a war torn nation.

Deyemi Okalanwo gave a strong performance so he is on our radar now. We can not overlook his role in this film. His character required showing traits of tyranny, fearlessness and occasional mental weakness which we feel he executed perfectly. We will be on the look out for more from him in coming months.

It was also nice seeing veteran actress Doris Sackitey in this title after many years off our screens.

Most people, we are sure wanted to see this movie because it also stars sensation

al award winning singer Noella Wiyaala. This is her first appearance in a feature film and it is quite clear now that she undoubtedly acts as well as she sings. Her delivery of her role was spot on and clearly showed off some of her personal traits – strength and courage.  We can’t wait to see more from her, film wise.

We were a bit disappointed that the movie did not have any of Wiyaala’s songs as part of the score. She has a lot of beautiful songs that could have suited many of the scenes in the movie, or she could have been further tasked with creating an original composition for this title. Nonetheless this movie had a perfect film score which we enjoyed in most of the scenes.

We also did not like how the story line was edited in some parts of the earlier scenes. It became hard to follow events as they unfolded when the scenes kept switching every few seconds.

Besides a few factual errors that can be ignored we feel No Man’s Land had a lot of the production elements right and spot on.  Cinematography and choice of locations was enough to sell the idea of this story being set in a small war torn nation. You would almost not notice that this movie was shot in Ghana since there where virtually no shots of popular city streets. The producers also had the make-up and costuming right. The wounds were made realistic enough to stir the right amount of pity and disgust at the ugliness of ethnic violence.

This movie had a very strong message to tell but we still feel a lot more depth and clarity could have been added to the script to make it much more relatable to Ghanaians who are the primary audience for this production.  We also feel it would have been much better if the story line had thrown more light on the actual terror that comes with Civil war. Of course that would have called for a bigger budget but judging from this debut we are quite sure Salmum Productions are poised at getting to that point soon.

Considering this as their first production we would gladly rate No Man’s Land a well-deserved 6.5/10. We are happy with this first release and would patiently wait for their next.

If you missed out on last nights Red Carpet premiere don’t worry you are not too late…. it is still showing at the cinemas so do well to go see this movie.

Do well to leave you comments, feedback or opinions about the movie in the comments section below.