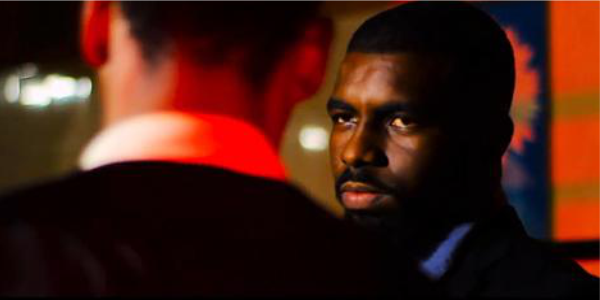 We finally got a chance for an exclusive viewing of The Northern King which premiered earlier on in March this year, courtesy of SEG Cineland.

We have always argued for the need for variety and sometimes experimentation in our industry’s styles and forms of storytelling. And it is always a delight for us seeing Ghanaian filmmakers daring to step out of the box that constantly stifles our creativity. This is one such film that dares to step out that box.

The film opens with a beautiful aerial short of an old fort overlooking the open ocean accompanied by an intense sound score that seems to introduce you into the world of suspense and intrigue it is building up. But that’s not all … you can’t also ignore the prologue giving up all the minor details that sets you up for the rest of the plot. This makes this film the kind that requires your attention right from the opening credits. It isn’t something you can easily jump in at any point in the run time and be able to fully understand and appreciate.

As M. Sayibu‘s directorial debut in Ghanaian Cinema, you could clearly feel the American noir styled influence that this film has right from the start.  In typical indie film style, The Northern King, oozes a directional style and vision far different from the usual Ghanaian film look and feel.

The cinematography in this film is basically a lot of handheld un-stabilized shots, racking focus and close up frames purported to give the viewer a more personal point of view experience for a better part of the film. The editing style pulls of fast cuts making use of several scenes of shorter duration to build the suspense and intensity. The twists and turns in this film can easily be lost on you with the many scenes it manages to fit into its screenplay. For the average Ghanaian audience who might not be used to seeing films take this kind of approach it could be a bit overwhelming to follow.

The entire film passes off more as an intense crime thriller than an outright action flick even by Ghanaian standards. With a dark theme in most of the color grading even in external shots with adequate natural light you get the immediate vibe that it is a film about crime.

Then there also the use of original footages of missions from Us Airmen to highlight the unstable mental of the lead character as he struggles to keep himself together and focused on the mission. This worked well enough to show the complexity of that character. Some archive news footages of riots with the Ghana Police also did help in realistically hinging the story being told.

At the center of the film is very average performance from Jeffery Forson who plays the role of Amin, the retired Airman. The complexity of the character he plays was sometimes lost in his not so convincing performance. But nonetheless his far off-look sometimes compliment the cold demeanor the Amin character needed to have.

Henry Adofo on the other hand nails his portrayal of a business minded drug lord. He easily dominates each scene he was making the viewer more critical of the performances of the other actors he stars along with.

We were also impressed with the performance from Justin Adda in this film and would certainly love to see more from him.

Towards the end of the film, we get to finally see some fight sequences that pretty much worked to complete the story but could still have been better executed.  The sound could have also been better.  It is easy to spot some of the key ADR work done if you pay enough attention to the film. But this didn’t ruin the fluidity of the dialogue.

From the cinematography, right down to sound score, in our opinion it’s difficult to distinctly identify a touch of a Ghanaian style in this film.

For a film shot on an estimated GHC 25,000 (averagely 5000 USD) budget its overall quality is quite commendable in contrast to its trajectory and intent. That is why would rate this film a well-earned 6.2/10 rating.

There is no doubt that using the somewhat unconventional approaches to step out of the typical Ghanaian styles of storytelling could prove very challenging both financially and logistically but the passion every filmmaker should have to be successful should fuel the drive. Yes, passion does count and really does make a difference especially when it comes to creativity.

We are definitely psyched about what else M. Sayibu has to show us as we wait for his next film, Slumber Party, expected to be premiered in October. We will do well to keep you informed on that.