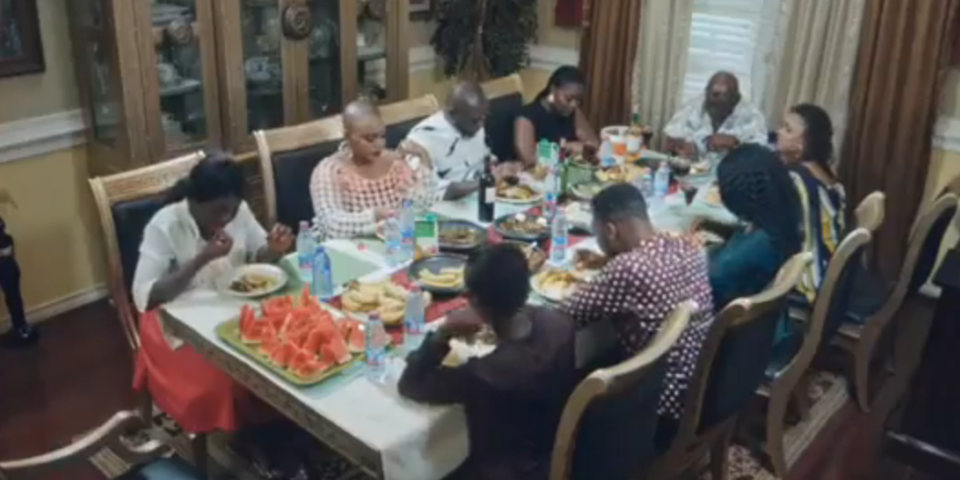 There is always talk about the current state of our film industry not being conducive for new production companies. And then out from nowhere, when nobody expected, walks in Eunice Aseidu Productions with a film that a lot of people are quick to adjudge the title of “biggest movie this year”.  A lot can be said about what it takes for any film to carry that title under any year in review. But for us at GhMoviefreak.com we would rather talk about how good the film is and how well it does both domestically and internationally.

Once Upon A Family, the debut production for Eunice Aseidu Productions, tells the story of a retired politician, his wife as well as their five daughters who return home for a family vacation each with their own agenda and problems. They must try to enjoy the vacation without getting in each other’s way or spilling any secrets that could lead to further problems.

The film’s story wasn’t much of anything extraordinary for us. A big family with many secrets coming together under one roof? Of course, it is clear what to expect from the start. Some shocking twists and some interesting revelations. And this film delivers moderately on that with some good proportions of humor.

With such a star-studded cast line-up, any film lover would be keen on knowing how well they would be able to perform along side each other and who is most likely to stand out in the film, performance wise. For the story of this film, we didn’t get to see so much of some of these actors making their characters seem either under used and completely out of place in terms of screen presence.

We feel there were several subplots and backstories that could have been better told or utilized to give the film a more solid story.  Whilst taking good advantage of the variety of actors in this film and their abilities to deliver a good performance if tasked.  For a better part of the film’s run time we were wondering what exactly the main plot besides the big family reunion was. It seemed like the subplot of the characters played by Mercy Johnson Okojie and Prince David Osei was the only part of the story that had some weight. But then, at some point that too just didn’t seem to add up for us anymore.

Although the story didn’t say exactly where the family was having their reunion it did elude that it was somewhere on the outskirts of Accra. Obviously because of the location used and some the shots that showed the family house surrounded by hills and lots of vegetation. Unfortunately, the aerial shots that seemed to serve as establishment shots showed areas in the city of Accra. This felt like a huge disconnect for us in terms of setting, location aesthetics and its contribution to the stories clarity.

There were also some inconsistencies in the time frame for how long the family had been together for the holidays. It seemed like too much happened in too little time whilst at the same time it felt like too much time had lapsed with  not enough details or a proper timeline of events.

Also, we felt the flashbacks used in telling this story occurred at random times with no proper corroboration of events resulting in more confusion for us. In fact, the entire film and its subplots seemed to have no proper direction in unison, till the scene with the confrontation where secrets where revealed.  We honestly feel the screenplay could have been better done to lead the audience on without leaving any of the central characters out at any point.

With what the production house had described as “a huge budget” in several publications, we couldn’t help but have very high expectations which were a bit let down not by the quality of the production itself but by the screenplay, the progression of the film and clarity of the story.

Most of the scenes felt like just fillers to an empty timeline on the editing bench since they did not add anything to the story being told besides provide something for the audience to laugh about. Especially the closing scene with Paulina Oduro and Richmond Amoakoh‘s characters and some other scenes which seemed to have so much dialogue which necessarily didn’t add anything to the progression of the story.

If you are in Kumasi do well to go catch Once Upon A Family and all the stars in it at the CCB Auditorium on KNUST Campus on the 8th of April. Be on the look out for other screening dates and venues as well.

If you did get to see “Once Upon A Family” last night as well, kindly share with us your thoughts and opinions about it in the comments section below.

Movie Review: Once Upon The 80’s – Where Will Our Films Go Without Substance?