Movie Review: "One Last Look" at the Overflow Experience. 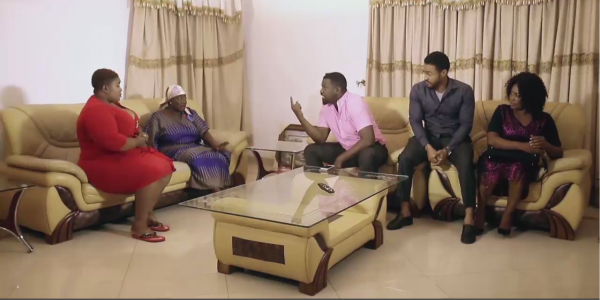 Last night we got to have a feel of the “Overflow Experience”, a Christian entertainment event put together by OVF productions.

This event successfully combined gospel ministrations with standup comedy performances and a premiere of a Christian themed film. Of course, if GhMoviefreak was there then we would certainly have something to tell you about “One Last Look”; the film that premiered last night.

One Last Look is a simple family drama  that looks at the lives of two couples and the challenges they each face in the struggle to make their marriages last.

The biggest strength of this film would be the scripts subtle Christian theme. On the surface you see just the normal lives of two couples facing marital problems and how they are able to deal with them. It doesn’t come off as a typical Christian film but slowly draws you in on importance of God and prayer and their significance in relationships.

It’s quite impressive that this  film that appeared to have been shot on a very lean budget was able to put together an impressive cast that includes, John Dumelo, Francis-Jamal Slocombe, Paulina Oduro, John Peasah, Belinda Dzatta and Fred Amugi. Regardless, we feel John Dumelo was very much under used in this film. We would have loved to see a bit more from him, considering that the character he plays in this film appeared to be more calm, quiet and reserved than most of the characters we have seen him play over the years. This is the first  feature film performance of Francis Jamal Slocombe we have seen. And he did enough to show us is worth as an actor and we would certainly like to see more from him. We also liked seeing John Peasah (Bra Charles of YOLO fame) hold his own in the scenes he appeared in.

The opening scene was a bit confusing and we hoped that in the end it would have made  some sense to us.  But unfortunately it didn’t. Also we felt most of the scenes dragged on for too long with dialogue that seemed somewhat irrelevant and added nothing to the depth or clarity of the story being told. We feel it would have been better if the screenplay had showed us a bit more into the lives of our lead character before they started having problems in their marriage.

The production elements in this film seemed quite basic but didn’t add or take anything away from the story being told.

Technically, the Accra International Conference Center isn’t the most ideal venue for a film premiere or screening. The entire viewing experience was ruined for us.  The sound quality was heavily marred and this made it very difficult to follow most of the dialogue without the extra effort of having to pay close attention.

GhMoviefreak rates this movie a fair 4.8/10 since we feel a lot more could have been done to better tell this story. The script could have showed more into the lives of the couples then it gave us.  Also we feel the characters could also have been developed a bit more to give more weight to the religious theme of the movie. Regardless we commend all the efforts put into the making of this film.

In the end, the Overflow Experience was quite a pleasant Christian entertainment event that we enjoyed being at. Whoever thought you could successfully combine a music show, comedy and arts performance and a film premiere?

If you saw One Last Look as well last night, do well to also share with us what you think about this film.