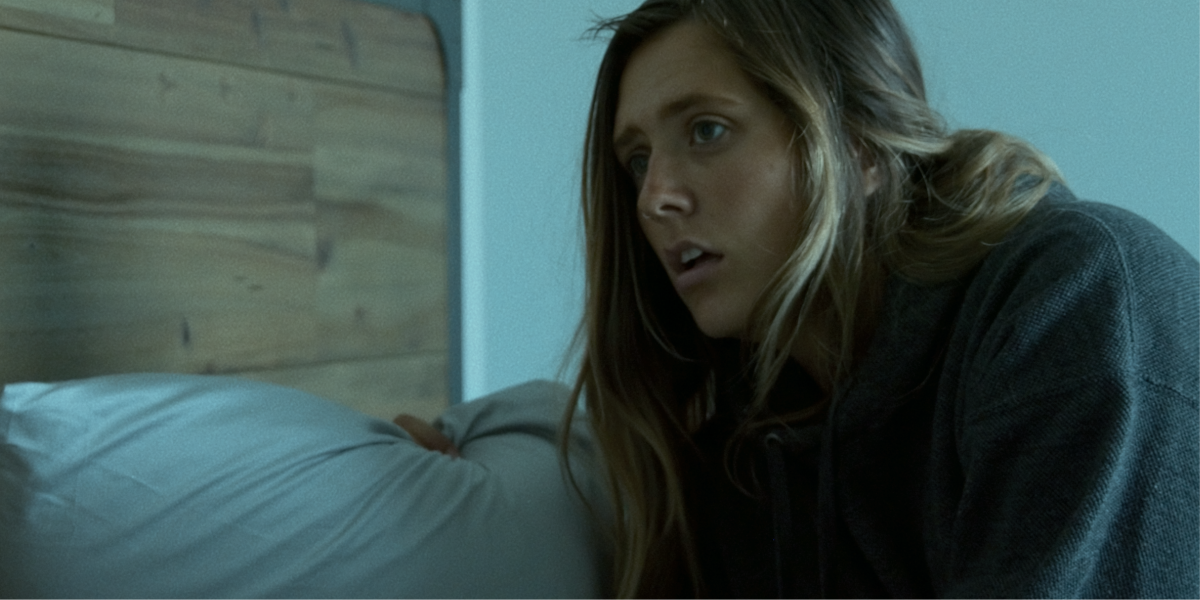 Leaving an abusive relationship is never easy but how do you leave and where do you go? Who do you trust and how far are you willing to trust them?

This thriller ‘Outlier‘ attempts to delve into this delicate subject matter.

Olivia (Jessica Denton) is in an abusive relationship with her boyfriend James. At one incident of abuse at a gas station, a stranger (Thomas) steps in to help her just in time. Thomas offers to take her away from her abuser and she obliges. They drive off to his lakeside home where Olivia decides to stay for a few days whilst she waits for things to settle down and James to cool off.

After a while, she begins to observe that she might not be as safe as she thinks. Is Thomas (Thomas Cheslek) her saviour or her captor?

When we first get to see Olivia she appears to be a woman broken by abuse. For her, the only escape from her relationship is to go with a stranger.

Even after some time in the safe haven that Thomas provides, she starts to feel paranoid. He has strange dreams every night and hears Thomas talking to someone. Each time she asks if she could leave, Thomas find ways to convince her to stay. And then she begins to suspect him more.

Thomas‘ motivations are explained but it is not clear or justifiable. You are still left wondering if he does have good intentions or he is just a creep looking for innocent and vulnerable people to prey on.

The film was shot during the lockdown period of the COVID pandemic. Perhaps that could be the reason it was made with a small cast. But they were enough to completely tell the story. However, there were a few moments that seemed a bit tiring having to focus on just Thomas and Olivia in the cabin.

The dialogue between them does enough to reveal more about their characters. Thomas details what happened to his mother and also why he chose to live away in seclusion. He has experienced abuse in the past. He later explains that he has built an app that uses algorithms and artificial intelligence to find people who are in abusive relationships and help them.

But how are why does that involve holding people against their will?

Thomas on the outside is loveable and doesn’t seem like a threat. He looks like someone you are very much likely to trust the moment you meet.

The film’s director Nate Strayer also plays the role of Charlie, a man who also helps Olivia at the gas station where she first accounted Thomas. As a feature film debut, this is a solid enough statement from the Strayer. How he tackles the subject and the film’s story its self has some brilliance to it.

The film generally is a slow burner and is very laid back. There are only a few moments that the intensity of this thriller is peaked as though something very unexpected was about to happen.

Outlier might be difficult to sit through, with the slow pace and the somewhat not so great acting but it has a message. The film explores the subjects of fear, control and trust. It also reflects the states of isolation and confinement that as was associated with the lockdown. It also tackles the subject of domestic abuse in relationships and the need for people to genuinely be of help to people in such situations.

I would score Outlier 6/10. As a passion project, it works and delivers a decent psychological thriller that could have been much better delivered.

The suspense builds up steadily but doesn’t lead up to a climax thrilling and unexpected enough to make you want to see it more than twice.

Outlier is available on all major platforms starting November 2, 2021, do check it out.