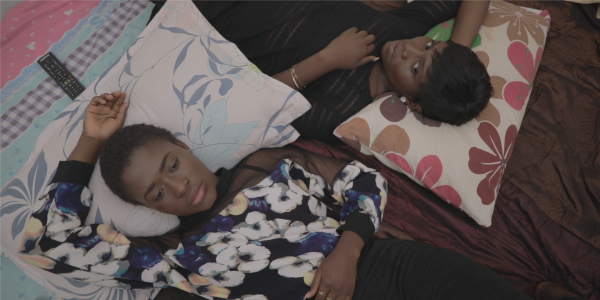 With all the questions about what “P Over D” really means, you can imagine the turn out the last night premiere of this romantic comedy from AIF Productions.

The presents a typical everyday “not so new” Ghanaian romantic comedy story with some interesting situations that made it quite different from the regular.

At the center of the story is, Ailla (Salma Mumin), a single independent mother who is living with the emotional scars of the betrayal from her baby daddy six years ago. She meets Theon (Toosweet Annan) through her friend Ursula (Ruth Kadiri) and a business associate (Peter Richie).

Theon who initially approaches her with bad intentions to only sleep with her after making a bet to do so with his friends ends up falling in love with her and her 6-year-old son.

Ailla is later forced to relieve her hurt past when she finds out Theon has a shady past where he betrayed Cassandra (Fella Makafui), another lady just like she was betrayed.

“P Over D” presents multiple characters with their own backstories and situations that all seem well intertwined by the end of the film. The story builds up steadily with the main focus on Ailla and chemistry that builds up between her and Theon with other backstories developing simultaneously.

Theon and his friend Jesse (rapper, D Cryme) share a bond because of their playboy ways and they know each other very well.  Jesse is the first to notice Theon had fallen in love with Ailla event before he himself accepts that he is. But as is typical of every equally bad wingman he continues to find ways to get Theon to just stick to his original plan of just wanting to sleep with Ailla. D Cryme does an okay job playing this character and provides a more jovial and somewhat funny contrast to the characters played by his costars, Toosweet and Peter.

There also seemed to be some great on-screen synergy between and Salma Mumin and Joseph Sunday Adebowale Okeyemi; the young boy he plays her son in the film. The synergy between these too sold their characters very well. There no doubt this young boy has got the knack for acting and should be encouraged to pick it up.

Although, both Grace Omaboe and Grace Nortey are thrown in the mix of talents in this film only in the final scene of the film its clear they haven’t lost their touch and still amazing to watch.

We found it a bit difficult to keep a firm grasp on the timeline of events in this film with some of the cuts in between scenes making the continuity between some of the scenes appear sloppy. Maybe it’s the young director, Kyei Baffour’s style of building up the suspense or show how the character are connected.

For  us, what really keeps the story together at most times is fair amounts of humor. In typical romantic comedy fashion, you are guaranteed of some decent laughs in this film. Bernard ‘Bishop’ Nyarko for instance steals most of the laughter with the serious yet humorous character he plays in enough scenes to make his character also important to the story being told.

Also, the sound output wasn’t the best on the premiere night but hopefully it has been fixed by now. For the quality of visuals and composition of shots used in this film, the sound didn’t compliment the overall quality of the production.

GhMoviefreak.com rates this film 6.2/10 after passing it through our scheme. For us, this film was anything but special. Besides it being worth the time spent on it, it is able to string along some decent amount of drama with its somewhat predictable suspense.

It felt like the “P Over D” was just a play on words that worked very well marketing-wise for the film as the story been told in no way explained or gave meaning to the choice of title. You just have to give it your own meaning at this point. Maybe the sequel would have all the answers we need.

In the end the film climaxes with an interesting revelation and that adds up to the several unanswered question, setting the viewer up for a possible sequel. But the story itself does little to tease the possibly of there really being a sequel that the audience should expect. Hopefully, that sequel if made would bring more meaning and clearance to most of the events in this film.

If you were at the premiere of “P Over D” over the weekend, share with us your thoughts on it in the comments section below.  If you are yet to see it, do well to go check it out at the cinemas as it is still showing and tell us what you think about it #forthelovoffilm

Also, don’t forget to add your voice to our rating for this film by choosing between 1 to 5 stars in in the user rating section below.