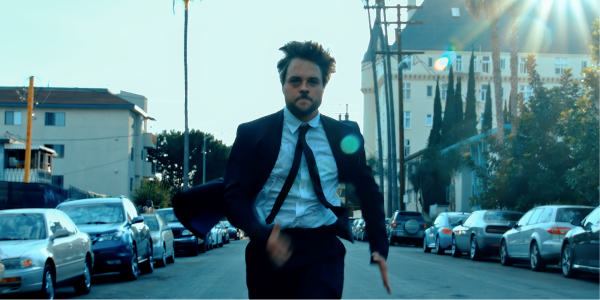 The film’s opening starts off like a quirky horror thriller setting you up for a big scare. And that’s how Damien meets his love interest Danielle. Their causal relationship goes on for months until Danielle makes clear her feelings and states that she wants more than just causal hookups. Damien is left with an ultimatum to decide if he really wants to keep the relationship. If he shows up for brunch to meet her mother, she’ll know he is serious. Terrified of his true feelings, Damien had no choice than to accept this breakup but his mind and inner feelings begin to spin out of control with haunting visions of commitment, just in time for his home town best friend to visit him in Los Angeles.

Aaron Burt in Philophobia: or the Fear of Falling in Love (2019)

The fear of falling in love can be very overwhelming for many as is the case of Damien in Philophobia. He tries to deflect from his emotional strife by finding ways to have fun with his peers, as his way take his mind of things. But he’s weighed down at every turn by the decision he has to take and what seems like a deadline steadily inching closer.

You can’t help but noticed the distinctive use of blue and red lighting and streaks that was consistent in all the night time external and internal scenes. And even mildly visible in the day time scenes.  This was also complemented in the choice of color pallet used for the grading of the day external shots as well. The consistent color theme was aesthetically pleasing and it also seemed to accentuated the state of confusion that Damien might have been facing, torn between the good or bad that could come out of love. Hence the cool blue and then the warm red contrasts artistically capturing those states.

Emily Pearse in Philophobia: or the Fear of Falling in Love (2019)

The horror elements are mild at best, with a lot of its effect hinged around sudden, unexpected attempts to scare the viewer. But that did not work most of the time. It turned out more funny than scary as you are left to laugh at Damien’s predicament than to sympathize with him. But most of the strong humor in this film is in the quick-witty responses from Damien to his peers. Somehow giving, testament to the character’s back story as a successful podcaster.

What’s more amusing about this film is how you can almost predict its ending right from the start, but you are still kept engaged and curious to see how it is going to reach that climax.  It manages to stay adequately entertaining and pleasurable to sit through. The satisfaction is in seeing how Damien deals with his struggles and matures to that point where he decides to face his fears.

GhMoviefreak.com rates this film a well deserving 6.8/10. For something that starts off like a typical boy meets girl story, it is unique and oddly satisfying. The story presents to us flawed characters in the crudest ways and puts a humorous and horrific spin on a subject that could evoke varying feels from any group of viewers.

Director Tyler Cole and writer Aaron Burt, (who also doubles as the lead in this film’s) take on the concept of philophobia clearly is something shot on a small budget but well thought out and delivered on. The end result is unique in its own way and is something that suffices at possibly putting both names in any conversation on memorable and daring romantic comedies.

Philophobia: Or The Fear Of Falling In Love will be released starting from 12th November, 2019 and is something you can check out with friends. It is absolutely something I would recommend for anyone who isn’t sure of their feelings or emotional state for someone they see as a love interest.

Philophobia: or the Fear of Falling in Love (2019) – Official Poster