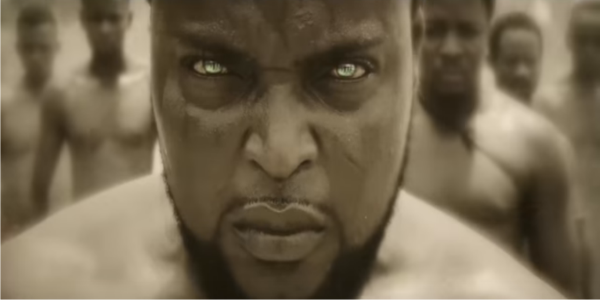 We sat down really proud as Ghanaians as we watched this culmination of hard work, creativity and intelligence put together to inform our minds that.. Yes, we can and we will if only we set our minds to it. ‘Pieil’ is a work that merges the past and the present, yet will last for the future. It presents to us an identity long lost as Ghanaians, and we seek to find more of this in the industry, this, Ghmoviefreak.com stands for.

‘Pieli- the rise of Montana’ is an adventure set in the early 1900 about a young man who suddenly realizes the sad reality that not only is he not of the family he has known throughout his existence and has grown to love so much, but also he is the only surviving child of a powerful clan (Chinto Clan) that perished in the hands of an immortalized warrior (Montana) who long pledged to annihilate the entire clan. With the resurrection of this ancient warrior, this young man must find a way to not to only save his self and the rest of his clan but he must also find out the real reason for this enmity.

We saw the trailer for this movie randomly online earlier this year and we were so excited and anxious to see it. We finally did and we got blown away.

This would be the first movie from a Ghanaian production company that flawlessly excels at combining myth and adventure in right proportions.  The mix is perfect enough to make you question if indeed this movie was made completely by an independent Ghanaian production studio.  Not to say that it is impossible, but… Yes, it has been long overdue. The power of movie making lies in the ability to tell and make believe stories that might not necessarily be true but have the force to take the viewer on a journey.

This film is truly Ghanaian as it makes extensive use of the Dagbani language throughout the dialogue. You are assured of being able to keep up with the dialogue with the English subtitles.

The cast wowed us with their performance and it was evident how comfortable and confident they were executing their characters speaking their local dialect. That shows and proves that we can still make quality movies in our local dialects.  A lot of times the argument of movies in the local dialect not being able to sell the country has wrongly been made and Pieli fervently debunks that.

We loved that this movie did not play on too many words and lengthy dialogues. But had a way of using silence and an excellent choice of sound score/background music to show all the intensity, suspense and thrill this story needed to have.

Right from the opening credits you feel the intense vibe of this movie and it doesn’t fault at keeping you in suspense right to the end. The heightened feeling of excitement and awe at the captivating visual effects and fight sequences in this movie would keep you at the edge of your seat throughout its runtime.

In total we loved the production quality of this movie. The choice of locations and scenery from the Northern parts of Ghana is everything that a movie of this genre needed. The quality of visuals and sounds was spot on. You could clearly see all the effort and hard work that had been put in to the making of this movie.

However we feel the story line could have made use of more characters especially some more extras to give it more life and depth in terms of the setting.. Regardless, that didn’t take away anything from the quality of the acting and drama from the cast that were selected for this movie.

Although “The Rise of Montana” is the pilot episode of this epic adventure, it is more than enough to entertain and excite you of the prospects and potential of Obl Studios.

The only thing that we hated about this movie was the fact that it ended. Yes, Pieli is that good, we wanted to see the rest of the story unfold almost immediately. Now we have to endure the agonizing wait for the next episode.

We have seen a lot of movies so far this year and we can confidently say this is the best so far, and it deserves a well-earned 8.8/10 rating.

Regardless of whatever challenges Obl Studios might have faced, they didn’t compromise on anything major to mar the quality of this movie and it is evident in the final product. You can only imagine what they would be capable of achieving with a bigger budget and a lot more support from the core industry stakeholders.

Pieli: The Rise of Montana is not only different and refreshing, it’s everything this industry needs to be reminded that there are no boundaries we can’t break if we put in the right amount of work and dedication.

Kudos to MeshGhana and Global Cinemas for combining efforts to bring this movie to theaters in Accra. If you are not believer in the potential of the Ghana film industry then you certainly have to see this epic adventure.

Peili: The Rise of Montana is still showing at the Global Cinemas on the Kasoa – Winneba Highway throughout the month of September. Make sure you dont miss out on it.

Also do well not to miss out on the premiere of The Road To Marshal Sea on the 23rd of September as part of Global Cinemas’ Local Movie Month Initiative.