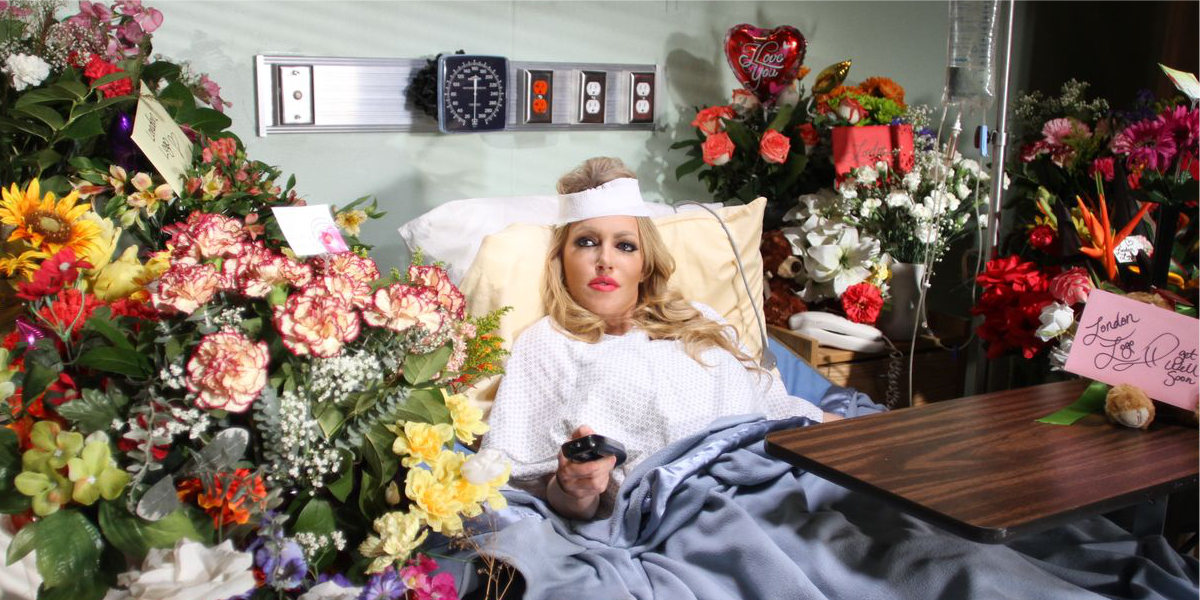 Many have said that reality TV Is creating a lot of stars who are known for nothing in particular. This film explores that argument in a documentary styled comedy about an heiress who is on a quest to show the world she is more than there is to the eye.

Reality Queen! parodies the everyday life of a talentless, clout chasing celebrity, London Logo played by Julia Faye West. After a head injury she is stunned by the fear of her reign and popularity dipping. She agrees to an in-depth interview and has her lifestyle scrutinised by a BBC journalist. She hopes that showing a more up-close and detailed look into her life would increase her popularity. With the help of her family and her support system she allows the cameras to follow here around opening herself up to more public criticism and ridicule.

The film gives an interesting look at fame today and what extents some people have to go sustain it. London Logo has an arch nemesis Kristy Kim (Candance Kita) and it humorous how they each try to outshine each other throughout the film.  The rivalry takes them both to some extremes as they adopt all kinds of tactics and strategies to court the most public attention. They both act dim witted and portray the typical social media  rivals who fight each other with hashtags.

London physically looks cosmetically enhanced all the time (almost like a caricature), busty in revealing clothes and spotting a tan. And is same for some of the other characters as well.  She prances about expecting to be swamped by paparazzi everywhere she turns. There is some shallowness about her utterances that gives justification to the ‘dumb blonde’ tag. But some of the rapid-fire humor is not just funny but smart. Overall Julia’s performance in this film is perfect for the character London.

Kate Orsini also delivers phenomenally with the character Diana Smelt-Marlin the big shot BBC Journalist who is interviewing London. She provides a fair balance to all the craziness and daftness that surrounds the London. The Larry King impersonator played by Charles Fleischer however doesn’t seem to work and felt too cheesy.

The late John Witherspoon‘s appearance was indeed a temporary save at that point in the movie. You can’t help but be awed by the whole different level of funny he brought to the film. Although a brief appearance it was very well felt added a lot to the film. Mike Tyson’s cameo was purely a marketing ploy that this film could have done without. But maybe it will help in some regardless. His name gets thrown about from the start as being in a leaked ‘sextape’ with London. when eventually he appears in the film, he is disappointingly given less than a minute of screen time.

Reality Queen more or less pokes fun at reality tv shows like The Kardashians, The Bachelorette, the various versions of ‘The Real Housewives’ as well as their stars or the celebrities they end up creating. For a film that you wouldn’t normally consider a big budget, judging from the production design, it has the looks and feel or an ‘okay’ budget film. London lives in a magnificent house and is costumed properly throughout the film to fit the profile of a high time big label roller. And that is same for her nemesis Kristy.

Director Steven Jay Bernheim and the group of writers (7 actually) credited for putting this together did a great job at keeping this as honest and candid as possible. There might be a few exaggerations but nothing too extreme or impossible. Some of the jokes are bare… but they hit home regardless. Taking swipes at all and sundry who are enablers of some the horrendous shenanigans clout chasers pull just to stay relevant. Nothing or no one is actually spared and receives their fair share of the satirical swipes. It is purely a satirical piece with  close semblances and inferences to real life people and situations.  It does well to appear to be offensive or disrespectful to any person or brand.

It is however interesting how in the London realizes that should go serve a greater purpose than her own self-gratification as the film ends. Hopefully that should be the case for many of the. real life talentless fame hungry celebrities.

Reality Queen deserves a 4/10 rating. It is funny and entertaining and only seems to have been longer than it should have been. You get the idea almost immediately from the get go and you are left waiting for when and how  it would end.

The fact there are actually people who are just famous for being only famous explains why this film needed to be made. It is not trying to be smart of provide any solutions to a problem. It is just trying to make you laugh at some of the situations and it does that at least without having to be confusing in anyway.