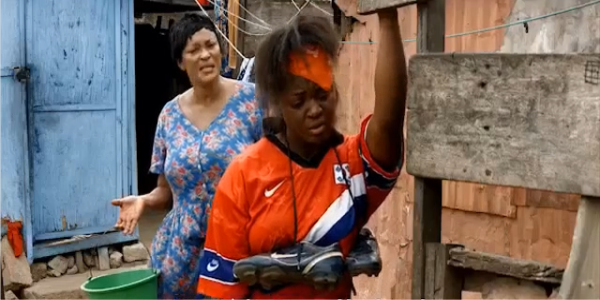 Sometimes we lose focus on why we are really doing this, especially when all the noise and distraction gets the better of us. But then, it only takes one moment of realization to remind us that we do this because we have love and faith in this film industry and its potential to sell Ghana to the rest of the world in a much positive light.

The idea of actress Jackie Appiah starring as a radical tomboy in any movie or posing in a soccer jersey and boots on any poster is enough to get a lot of people’s attention. But when that idea is backed by a Kobi Rana story that promises an entertaining and educative ghetto experience, then you are guaranteed to have sold out cinema halls on a premiere night. That’s exactly our observation from last night’s premiere of SALA.

SALA tells the story of struggling mother whose husband’s return, from a 10 year imprisonment, does nothing to better the lives of her and their two daughters. In her struggle to protect her daughters, the best way she can, she faces losing them all to the vices their slum community is faced with.

It’s refreshing to see Kalsoume Sinare and Jackie Appiah both step out of their usual glam characters we have seen far too many times. They both fared well at showing us (… for lack of better word), ghetto sides of themselves.  And it’s evident that they did so to the best of their acting abilities in this film.

New face, Eman Sinare made her acting debut in this film. She plays the role of Becky, the timid and obedient daughter of Sala. For us, she gave a spot on delivery. Its clear she understood the role she was tasked to play, showing all the right levels of emotion and distress in her lines. And we are excited about seeing what else she has for us in the next movie she features in. She has a soothing screen presence and innocence that we seem to think would make for a good romantic drama.

This film also stars the evergreen Fred Amugi and model Ian Wordi who both also, did great in their roles.

Director Kobi Rana did a very good job at bringing to us the familiar sights and sounds of a typical Ghanaian slum. It’s amazing how much details were captured in the cinematography for this movie. You get to see the beauty in the struggle of lives of simple Ghanaians living in slums. The biggest strength of this film for us is the visuals it comes with.

The crude use of local dialects; Ga, Hausa and Twi in the dialogue of this film gives it all the mature humor and entertainment that it promises. Most of the lines that were said in local dialects couldn’t have been better said in English. This also made the scenes more relatable and you could tell that from the audience’ appreciative laughter. As much as the story line progresses with too many unfortunate events than you would expect, there are more than enough scenes that would make you laugh.

For a better part of this film, we felt like the story line wasn’t going anywhere. The screenplay wasn’t fluid enough for us.  It appeared like there were too many good scenes that couldn’t just be cut out so were just left in to fill the timeline.  It became a bit of a chore in the end trying to piece together all those scenes and finding some reason to appreciate whatever significance they intended to add to the story line. But disappointingly they left room for too many questions that needed to be answered.

SALA speaks on matters such as breast cancer, rape, HIV and drug abuse which is very commendable. But we expected that it should also have highlighted a bit on the importance of education and schooling as well, considering that this film would appeal to a lot of people living in slums.

We would rate this movie 6/10 because as much we enjoyed it, we feel the screen play didn’t do a good enough job at holding the elements it had right together.  SALA had everything right for us except a compelling screenplay that would have better told the story in intends to tell.

Nonetheless, we can confidently say SALA is a much better movie than the last two Kobi Rana films we have seen. (Read Reviews for those here). Let’s see how it fairs at the upcoming Ghana Movie Awards after bagging a record 15 nominations.

Movie Review: “One Last Look” at the Overflow Experience.