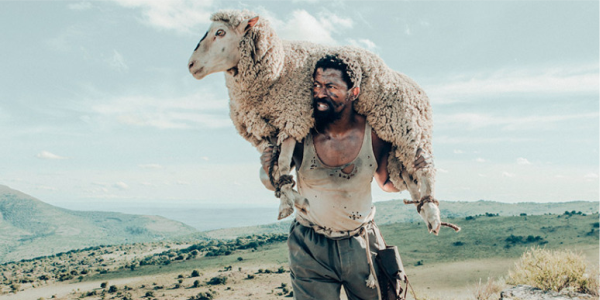 Sew the Winter to My Skin recounts the story of outlaw, John Kepe, the self-proclaimed “Samson of the Boschberg Mountains” who stole primarily livestock from farms in the vast arid expanse that is South Africa’s rural Great Karoo region and shared his spoils with the impoverished poor. It highlights the epic man hunt, capture and trial of the native robin hood for crime of murder he did not commit.

For something that seems to be about the early days of apartheid in the South African this film doesn’t come off in anyway like it is politically themed. It does well serve as something that seeks to tell a story of someone almost mythical and notable from that era.

It can’t be described as something that could be historically accurate, but nonetheless it tells an emotional story of strife and the intense resolve of man willing to sacrifice it all of the sake of his people in a time when colonialism and its extremes had dimed the light of most Africa.

The story telling uses minimal dialogue and relies heavily on the visuals, ambiance and occasional speech to paint the words needed to tell the story. The soundtrack used also contributes significantly to painting the pictures. It is visually and aesthetically pleasing to process whilst you watch. But the daunting task can only be appreciated by someone willing to try to understand where this film is going and why the story being told is of any significance.

The beautiful art direction mirrors that of a western set in Africa. It combines lights and darkness in varied proportions that sets a distinct tone for each scene without straying too much from the gritty dark and western feel that it exudes right from the start.

The mixture of drama, tragedy, thriller and adventure is subtly garnished with little amounts of unexpected humor. The comedy is not glaring in your face, but it’s there and contributes decently to how you would feel about this film.

Surprisingly, the story is told out of sequence so appears a bit more difficult to follow if you are not paying attention and also if you focus to much on John Kepe. Most of the rest of the story and the supporting characters are relegated to the background in the storytelling. Well except for the character Black Wyatt Earp, the almost intimidating, gun-slinging compatriot of the Whites hunting Kepe. You can’t help but notice that he clearly appears to be on the wrong side, but his emotionless demeanor only goes to confirm that he doesn’t seem to be bothered or conflicted the least. I believe that character only affirms or symbolizes that the black man too had a role to play in our woes, in one way or the other and it would be unfair to put all the blame on our colonizers. Just like most of the themes deployed in this film, Jahmil X.T. Qubeka’s voice is strong but difficult to pick out in this well mixed cocktail of visual symbolism.

I would rate this film 7/10. Overall, Sew the Winter to My Skin is unique in style and finds a way to leave you confused and spell bound telling a story as equally captivating as it is entertaining. Once you are able to look beyond its long and winding structure, you are left to appreciate the beauty, emotions and the poetic nature of the story telling albeit the clear lack of adequate dialogue.

You too can watch this film by being part of the Cinewax Online African Film Festival (OAFF). Simply go to http://oaff.cinewax.org/, sign up and get to stream this and 29 other African films from 15th November to 15th December 2019.

If you have seen this film already share with us your thoughts on in in the comments section below.