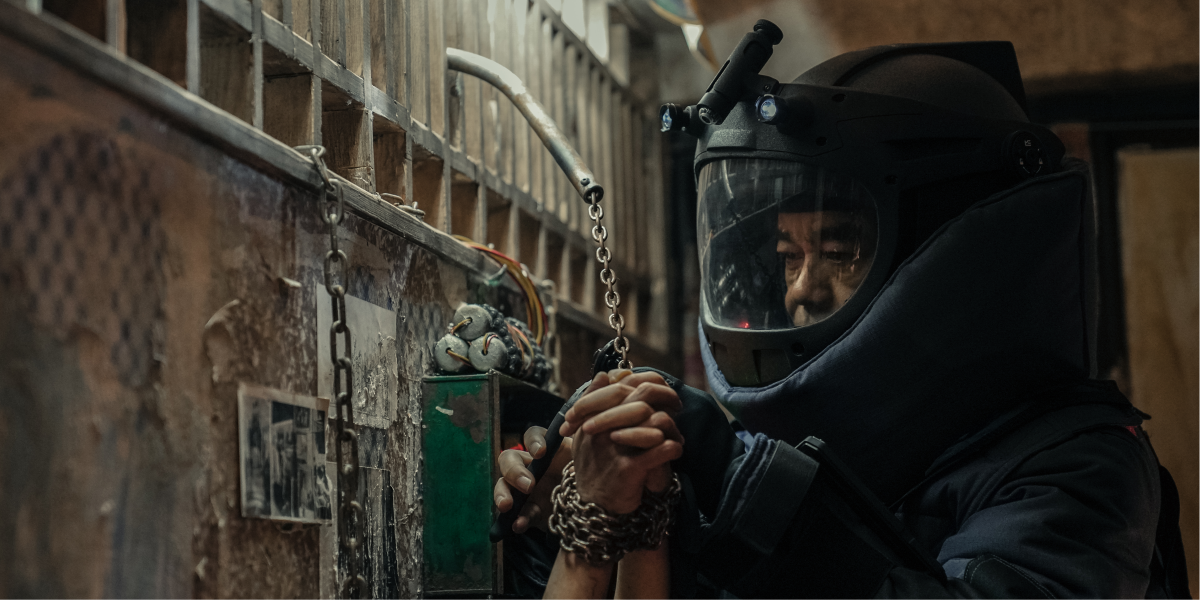 Shock Wave 2 is not a follow-up sequel to Shock Wave (2017) which also stars Andy Lau as Cheung J.S. a Hong Kong cop. It’s easy for anyone to be confused that the two films are linked since they all have to do with terrorists, bomb plots and one man going above and beyond all means to save the city.  Besides the obvious similarities, they are not linked.

Herman Yau just rolls the dice remaking a film that has already been a huge success. Perhaps this time, on a much bigger scale with much bigger ambitions and expectations. But, does it work?

Lau plays Poon Sing-fung, in Shock Wave 2. He is a brave bomb disposal officer who loses one of his legs in a booby trap blast that almost takes the lives of him and his partner. He fights hard and regains his strength and even with one prosthetic leg, he manages to top all the field requirements need to get him back to work. But he is only offered a desk assignment but he declines and quits the force.

3 years later he is the key suspect in a terrorist act. He wakes up from can’t seem to remember his past and his own identity. He now has to find out the truth of who he really is and what he has been up to all this while after living in the police force.

With the help of Pong Ling (Ni Ni), an old love interest of his, he must find a way to clear his name and save the city from any further catastrophes.

There is no time wasted here as you are immediately sucked into the action and frenzy as soon as the film starts. Director Herman Yau seems to know exactly what he was going for and wastes no time at it. Everything is fast and no scenes are dragged. Even the flashbacks that a meant to reveal pertinent details about the character’s pasts are quick and straight to the point.

The screenplay for ‘Shock Wave 2‘ starts with an alternative ending, backtracks to the start of events, sends you on a roller coaster ride and builds up to a climax that is equally as enthralling as the alternate ending we get to see at the beginning of the film.

As you would expect, all the acting performances were well delivered with the action choreography spot on. From start through to the end, you feel the adrenaline rush with the fast pace of events and the fear of an explosion going off. The action sequences are fast-paced and well done. The CGI also decently complements the story being told making everything more intense.

Andy Lau is unforgettable in this one. Shock Wave serves as a great introduction to the action star if you are not already familiar with him and his work. He is equally good at delivering his lines and displaying emotions as he is in action stunts and fight scenes. In this film, we see him moved to the verge of tears at one point and he executes that performance convincingly.

Poon‘s motivations for becoming a terrorist are not justifiable enough. As the centre of the story, and how some of the plot twists reveal happenings from earlier on, you keep asking yourself if it is all enough reason for him to want to be involved in committing such a heinous act of terror. You can’t help but want to be on his side even when you are not certain where exactly he stands as hero or villain.

This is a through and through action thriller with no resources spared. There is hand to hand combat, gunfights and high-speed chases. The bomb-defusing scenes are enough to keep you at the edge of your seat whilst holding your breath.

It’s almost as though the directors took everything that went right with Shock Wave and amplified it 10 times more to make this film.

For some, the action might be too much and unbelievable. But take all that away and there is still a decent story being told here. I would rate ‘Shock Wave 2‘ 7.5/10. It’s entertaining, satisfying and complete worth the time spent sitting through it.

If you are a fan of the action-thriller genre then this one is certainly for you. As to if its better than the first one (Shock Wave 2017), you have more reason to see both movies for a better comparison.